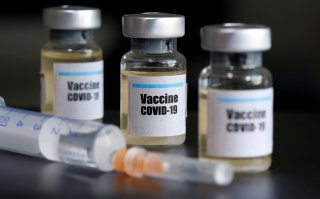 After a large amount of research laboratory experiments and testing on mice, Army scientists have developed a coronavirus vaccine that has now been selected for human testing, opening a series of possible doors to longer-term relief from the pandemic.

An announcement was made by the U.S. Army Laboratory, Walter Reed Army Institute of Research (WRAIR), an element of Army Futures Command, that a vaccine they have been working on got selected for human trials.

“The candidates were narrowed down from more than two dozen prototypes in order to determine the candidates that elicited the most promising antibody response in preclinical studies. The leading candidate is called SpFN, for Spike Ferritin Nanoparticle, and will enter first-in-human testing later this year,” a statement from WRAIR said.

Human testing is slated to begin by as soon as this month, now that a vaccine prototype has been determined to be safe for human experimentation.

“Once your immune system comes into contact with a disease and defeats it, it creates antibodies. The testing on mice is to make sure they are creating the antibodies,” Terry Welch, Strategic Communications Director, Walter Reed Institute of Research, told Warrior earlier this year.

While safety and effectiveness are defining requirements for use of new vaccine prototypes in humans, Welch added that there are some instances where preliminary FDA approval can be expedited for “emergency use.”

One reason it can take many months to solidify or formally approve an effective vaccine is due to the complexity associated with what scientists call the “adaptive immune system.” Developing antibody defenses against specific pathogens can be a complex and challenging medical process, according to a 2011 essay in the “Journal of Infectious Global Diseases” called the “Fundamentals of Vaccine Immunology.”

As opposed to the body’s more general resistance, called the “innate immune system,” an adaptive immune response is “specific to the particular pathogenic agent.” An innate system therefore, the article explains, consists of protective measures described as a “first-line defense” such as intact skin and mucous membranes which “prevent the entrance of many microorganisms,” the essay states.

Other elements of an innate system include things like inflammation or elevated body temperatures caused by a fever able to further stop or fight off pathogens and toxins. However, these biological methods used by the so-described “innate immune system” do not enable an immune response to “improve its reaction with each repeated exposure to the same pathogenic agent,” the essay explains.

These biological phenomena described in the essay explain why there is so much discussion now about “antibodies” specific to the coronavirus. After all, a vaccine exposes the body to low levels of a pathogen to help the body develop the “antibodies” needed to destroy it and develop COVID-19 immunity, as referred to by Welch.

“As soon as the virus sequence was published in January 2020, WRAIR began conceptualizing a vaccine strategy,” said Dr. Kayvon Modjarrad, Director of the Emerging Infectious Diseases Branch of WRAIR, according to the Army release.