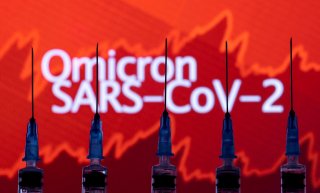 A new study from the University of Hong Kong has found that the Omicron variant of the coronavirus multiplies at about seventy times faster than the original and Delta versions of the virus, the Guardian reported Wednesday. The study did find that the virus grows ten times slower in lung tissue, which is a sign of less severity.

These findings fit with existing data gathered since Omicron’s emergence, that the variant spreads more easily but tends to lead to less severe illness.

“It is also noted that by infecting many more people, a very infectious virus may cause more severe disease and death even though the virus itself may be less pathogenic,” Michael Chan Chi-wai, head of the study, said, per the Guardian.

The study is not yet peer-reviewed, the newspaper said.

Also Wednesday, per CNBC, White House chief medical advisor Dr. Anthony Fauci said that boosters of the Pfizer vaccine are enough to increase protection against symptomatic disease to seventy-five percent, although the first two vaccines without a booster are “significantly compromised.”

Dr. Fauci added that there is currently no need for a vaccine-specific booster. Pfizer and BioNTech said last week that they are working on such an Omicron-specific booster and are hoping to have it ready by March.

“And so the message remains clear. If you are unvaccinated get vaccinated, and particularly in the arena of omicron if you are fully vaccinated, get your booster shot,” Fauci said.

As of Wednesday, per Director of the Centers for Disease Control and Prevention Rochelle Walensky, thirty-six U.S. states had cases of Omicron, with the new variant making up about three percent of cases around the country. That number, however, is higher in New York and New Jersey.

Britain, meanwhile, is experiencing a “tidal wave” from the Omicron variant, per CNN, with infections doubling every two or three days. That country’s Health Secretary, Sajid Javid, told Parliament that Omicron already accounts for forty-four percent of cases in London and that it is expected to become the dominant variant in that city within days.

However, as of yesterday, only ten people had been admitted to the hospital with confirmed cases of the Omicron variant.

Vox, interpreting a study this week, found that while Omicron may provide a lower risk to individuals, it provides more for the overall population.

“The strategies that have contained Covid-19 throughout the pandemic still work against omicron, but governments, institutions, and individuals have to be willing to use them,” the Vox story said.