No, the Coronavirus Is Not a Bioweapon from China 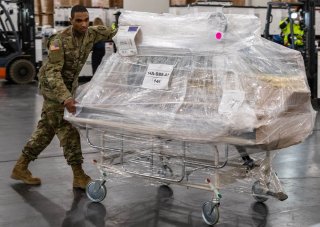 No, the novel-coronavirus is not the creation of a Chinese biowarfare laboratory.

Experts for months have been very clear. All the evidence points to SARS-CoV-2 jumping from bats to people, perhaps via an intermediary animal species.

The coronavirus is not man-made and it’s not a weapon, despite insinuations from the administration of U.S. president Donald Trump and its allies, as well as some in the media.

Shortly after the virus and COVID-19—the disease it causes—began spreading in and around the Chinese city of Wuhan in December 2019, The Washington Times, a conservative-leaning U.S. newspaper, circulated the unfounded rumor that the coronavirus came from a research facility.

The paper cited former Israeli military intelligence officer Dany Shoham in order to make the claim that the virus “may have originated in a lab linked to China’s biowarfare program” in Wuhan.

Columnist Steve Mosher in late February 2020 repeated the false claim in a New York Post op-ed. By then the conspiracy theory had a popular following.

It’s true that Wuhan is home to the Wuhan National Biosafety Laboratory and the Wuhan Institute of Virology, both of which have worked on biological warfare. To be clear, there are similar laboratories all over the world, including in the United States.

Anyone claiming, or even hinting, that these laboratories created SARS-CoV-2 and then purposely or accidentally released it into the surrounding community are doing so without proof. There is “no credible evidence” that the coronavirus came from a lab, researchers led by Shan-Lu Liu at the Ohio State University told New Scientist.

“Based on the virus genome and properties there is no indication whatsoever that it was an engineered virus,” Richard Ebright, a professor of chemical biology at Rutgers University, told The Washington Post.

Geneticists can tell when a virus is man-made or artificially altered. “The virus’s genome has been sequenced, and if it had been altered, we would expect to see signs of inserted gene sequences,” New Scientist reported. “But we now know the points that differ from bat viruses are scattered in a fairly random way, just as they would be if the new virus had evolved naturally.”

“It has too many distinct features, some of which are counterintuitive,” Robert Garry, a virologist at Tulane University, told Science News.

“SARS-CoV-2 did not escape from a jar,” a team of scientists wrote in The New England Journal of Medicine. “RNA sequences closely resemble those of viruses that silently circulate in bats, and epidemiologic information implicates a bat-origin virus infecting unidentified animal species sold in China’s live-animal markets.”

Despite the scientific consensus to the contrary, the baseless notion that the coronavirus is man-made has even found an audience in the top ranks of the U.S. military. “We’ve had a lot of intelligence take a hard look at that,” U.S. Army General Mark Milley, the chairman of the Joint Chiefs of Staff, told reporters on April 14, 2020.

“At this point it’s inconclusive,” Milley said, “although the weight of the evidence seems to indicate natural. But we don’t know for certain.”

Milley is wrong. SARS-CoV-2 came from animals. It’s not a weapon.