No, Immigrants Aren’t Causing the Coronavirus 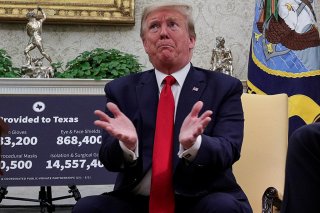 There are plenty of causes to blame for the coronavirus—immigrants aren’t one of them. Of course, there’s no persuading President Donald Trump of that.

Trump continued his long-standing crusade against immigrants in the fineprint of the CARES Act, signed into law on March 27. It includes $2 trillion worth of direct stimulus payments to U.S. families, but excludes most U.S. citizens and legal immigrants who have spouses who are here illegally.

Forty-five million immigrants reside in the United States—and 73 percent of them are authorized to be here. It’s not uncommon for immigrant families to be of mixed-status. In many cases, one or both parents are undocumented, but all of their children are U.S. citizens. Pew found that undocumented immigrants “live in 5.2 million U.S. households totalling about 20.2 million adults and children” and a majority of the people who live with undocumented immigrants “are U.S.-born minor and adult children.” But, because one member is undocumented, the entire family must suffer. Turns out the CARES act isn’t so caring.

Punishing U.S. citizens over the status of their family members is yet another blow to the immigrant communities that the administration has been attacking since day one of Trump’s time in office. But that’s just one attack on immigrants, among many, that Trump has launched since the pandemic began.

On April 20, Trump tweeted, “In light of the attack from the Invisible Enemy, as well as the need to protect the jobs of our GREAT American Citizens, I will be signing an Executive Order to temporarily suspend immigration into the United States!” True to his word, two days later, he signed an executive order to halt the issuance of new green cards. Right now, this order is effective for sixty days, but after that period, it could be reissued.

Trump is effectively using the coronavirus as an excuse to crackdown on immigration. His core argument is that immigration to the United States is actually spreading the novel coronavirus. Of course, the numbers say otherwise. According to Alex Nowrasteh of the Cato Institute, “the rate of COVID-19 cases and deaths by county in the United States is not correlated with the share of the population that is foreign‐​born.” Nowrasteh also points out that in 1918, during the ravagings of the Spanish Flu, 110,000 immigrants entered the United States, and that pandemic was far more devastating. In fact during the 1918, the United States admitted “170,952 immigrants on green cards and 227,668 bracero guest workers to work in the essential economic sector of agriculture.”

COVID-19 has presented tremendous problems for many countries to overcome. Yet, Trump still finds time to attack immigrants. Not only did he approve that many of them be left out of the CARES Act, now he is halting all immigration to America. Trump is finally achieving his dream of closing the borders. Something he will surely tout during his 2020 re-election campaign.

And we’re all going to pay for it. After all, Trump actually barred essential personnel from working in the areas that are hit hardest by coronavirus because of their immigration status. Many of the more than 4,200 resident doctors who matched at U.S. medical facilities in March and are scheduled to start working in July but it appears they may be unable to help, because the State Department has temporarily stopped issuing them visas.

According to The Intercept, the United States “has more than 10,000 physicians who were trained in and currently live in the U.S., but are unable to work for any hospital other than their current employer because of visa restrictions, despite the historic public health emergency.”

One-quarter of U.S. physicians are foreign-born. Many of those doctors came to America. on J-1 or HB-1visas that don’t allow them to change jobs or even volunteer at other hospitals because their current workplace must sponsor their visa. All in all, there are about 1.5 million immigrants employed in the health care sector. Not only do immigrants not spread the virus, many of them desperately want to help fight against it, and Trump is tying their hands.

Why? The only answer is the hope of political gain, but now certainly isn’t the time for that. For the good of the American people, if nothing else, Trump must put aside his political agenda and focus on what he should—putting an end to the disease that’s ravaging his nation.

Natalie Dowzicky is a manager at Washington D.C. think tank, a Young Voices contributor, and a co-host on the Pursuit Podcast (@ThePursuitPod) & the Pop & Locke podcast (@PopnLockePod), both produced by libertarianism.org. Follow her on Twitter @Nat_Dowzicky.