Not So Fast: CDC Backtracks on Some of Its Omicron Statistics 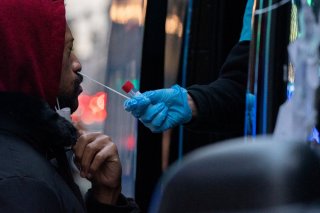 When the Omicron variant started ripping through the U.S. population earlier this month, one of the more shocking statistics was released by the Centers for Disease Control and Prevention (CDC). The agency said last week that the Omicron variant was responsible for seventy-three percent of cases in sequenced infections when that figure had been in the single digits just a week earlier.

However, the CDC now says that figure was off.

According to Bloomberg News, the CDC said that in the week that ended on Christmas Day, Omicron accounted for around 58.6 percent of cases, compared to 41.1 percent of cases that are still Delta. But CDC also revised the previous week’s figure dramatically downward, from the original number of 73 percent to 22.5 percent.

So Omicron is now the main variant, and will almost certainly grow more dominant compared to Delta. But it turns out it didn’t grow quite as quickly as first reported.

A CDC spokesperson, per Bloomberg, stated that additional data came in which caused the CDC to bring down the earlier proportion.

The CDC also said that Omicron is especially dominant in certain geographical regions of the U.S., accounting for eighty-eight percent of cases in New York and New Jersey, although Delta is still more prevalent in some states, especially in parts of the Midwest.

The news comes as daily case counts exceeded 500,000 on Monday.

Speaking of Omicron and Delta, a preprint study was published this week, titled “Omicron infection enhances neutralizing immunity against the Delta variant,” which was based on data from South Africa. Dr. Scott Gottlieb described the study on Twitter as evidence that “Omicron will help push Delta out, as it should decrease likelihood that someone infected with Omicron will get re-infected with Delta.”

“The increase in Delta variant neutralization in individuals infected with Omicron may result in decreased ability of Delta to re-infect those individuals,” the study, which has not yet been peer-reviewed, said.

Earlier this week, the CDC adjusted the guidelines for the quarantine and isolation periods for those with COVID-19. The agency announced that it was shortening the time for isolation from ten days to five.

“The change is motivated by science demonstrating that the majority of SARS-CoV-2 transmission occurs early in the course of illness, generally in the 1-2 days prior to onset of symptoms and the 2-3 days after,” the CDC said in the Monday announcement about the change. “Therefore, people who test positive should isolate for 5 days and, if asymptomatic at that time, they may leave isolation if they can continue to mask for 5 days to minimize the risk of infecting others.”