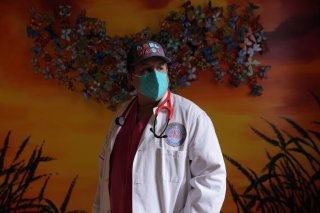 The continuing Omicron wave has hit a grim milestone: its daily cases counts have already passed those of the height of the Delta wave earlier this year, according to the New York Times. The current record for average daily cases in the United States is 251,232, set during last January’s winter wave, although the newspaper said that cases could reach a million a day before the end of the year.

Studies om England and Scotland show that infections caused by Omicron are milder than those of previous variants, according to the New York Times.

Over the course of about a week, Omicron went from single digits of the new cases in the United States to 73 percent of the cases. It became the dominant variant in the country.

Also, this week, the CDC announced a new “Interim Guidance for Managing Healthcare Personnel with SARS-CoV-2 Infection or Exposure to SARS-CoV-2,” which has shortened the recommended isolation time for health care workers who test positive for coronavirus to seven days, from the previous ten days. The change only applies, however, if the personnel are asymptomatic.

The idea is to make more health care workers available and keep them off the sidelines for a shorter period of time.

“As the healthcare community prepares for an anticipated surge in patients due to Omicron, CDC is updating our recommendations to reflect what we know about infection and exposure in the context of vaccination and booster doses, CDC director Rochelle Walensky said this week.

On Thursday, airlines announced the cancellations of hundreds of flights. United Airlines and Delta Airlines have canceled a huge number of flights, according to CNN.

“The nationwide spike in Omicron cases this week has had a direct impact on our flight crews and the people who run our operation,” a United memo obtained by the CNN said. That airline has canceled over 150 flights.

Delta Airlines announced the cancellation of more than 100 flights on Christmas Eve.

“We apologize to our customers for the delay in their holiday travel plans,” Delta said in a statement Thursday. “Delta people are working hard to get them to where they need to be as quickly and as safely as possible on the next available flight.” Alaska Airlines also announced cancellations this week.