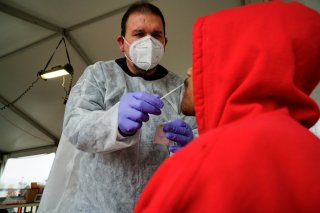 With the Omicron variant continuing to burn through the population, the United States has been setting records on a near-daily basis for new coronavirus cases—and it did so again on Thursday.

Johns Hopkins University announced that the nation has reported an average of 355,990 new infections in the seven days that ended Thursday, per CNN. That represents a new record. As does the reported Thursday figure of 647,067 cases. The cases are not necessarily all related to the Omicron variant, as the Delta variant continues to infect people in the United States and elsewhere.

Per the New York Times, 488,000 cases were reported on Wednesday, also a record. And Europe has been setting such records on a near-daily basis as well.

The actual numbers, however, are likely much higher, as many have likely contracted the disease from the Omicron variant but have not ever tested positive or reported a positive test to any authorities.

Dr. Anthony Fauci, per that report, said in a televised interview this week that the nation is likely “a couple of weeks” away from the peak of the current wave, which Fauci placed at the end of January.

Even more grimly, children were admitted to hospitals with COVID-19 at an average of 378 children per day, which is also a record high for the pandemic, per CNN. As with adults, the majority of those hospitalized are not vaccinated against the virus, although not all children are eligible.

There is some reason for optimism, however. South Africa, where the variant first appeared, said this week that it has passed the peak of Omicron without any major spike in deaths, indicating that something similar could happen in the U.S. and other countries.