Omicron Could Still Cause a Wave That Fills Hospitals, Fauci Says 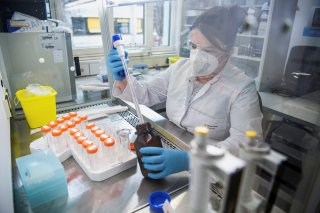 With the Omicron variant of the coronavirus spreading around the country, many are less worried, due to the belief that the variant leads to less severe illness than other, past variants of the virus.

However, Dr. Anthony Fauci warned in a television appearance over the weekend that the country still risks a scenario in which hospitals are overwhelmed.

Fauci told ABC’s This Week on Sunday that there are likely to be so many infections caused by Omicron that the variant still has the potential to overwhelm hospitals.

“The issue that we don’t want to get complacent about, Jon, is that when you have such a high volume of new infections it might override a real diminution in severity,” Fauci, the chief White House medical advisor and head of the National Institute of Allergy and Infectious Diseases, told This Week.

Fauci added that he expects case numbers to go much higher as the Omicron wave continues. The average last week was 150,000, and subsequent weeks are likely to get higher.

“So that if you have many, many, many more people with a less level of severity, that might kind of neutralize the positive effect of having less severity,” Fauci said.

A recent study out of Scotland, as cited by the Globe, found that Omicron is “associated with a two-thirds reduction in the risk of Covid-19 hospitalization when compared to delta,” although Omicron is ten times more likely than Delta to infect those who had previously been infected.

Last week, President Joe Biden announced a series of actions meant to deal with the rising Omicron variant. These included more support for hospitals, troops and federal medical personnel at overwhelmed hospitals. The administration is also focused on delivering N-95 masks, ventilators and other such items to states as needed.

In addition, the White House is planning to make testing kits available to those who need them, while also setting up new testing sites. And the administration plans to continue encouraging as much vaccination as possible.

Also last week, the FDA granted emergency use authorization for a pill, from Pfizer to treat coronavirus infections.

“Recognizing that this pill takes time to make given the complex scientific process, production will ramp up in the months ahead,” the White House said in a press statement. “We will have over 250,000 treatment courses available to us in January and we will be working with states to ensure those are being distributed equitably and fairly and that our hardest-hit communities are reached.”