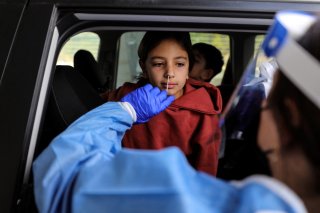 It appears that the spread of the new and highly mutated Omicron coronavirus variant is already reaching peak levels as the strain now represents 95 percent of all sequenced cases in the United States for the week ending on New Year’s Day, according to new data released by the U.S. Centers for Disease Control and Prevention.

Only about a month ago, Omicron—first detected in South Africa in November—represented less than 1 percent of all sequenced cases.

The concerning data release comes as the United States logged another grim milestone amid the nearly two-year-long pandemic fight. According to data compiled by Johns Hopkins University, it showed that more than one million new coronavirus infections were registered a single day, raising the rolling seven-day average of daily new cases to more than four hundred eighty thousand. About one in every one hundred Americans will have contracted the virus in just the last week, the data further revealed.

In addition, nearly one hundred thousand Americans are currently hospitalized with COVID-19, according to a seven-day average of data released by the Department of Health and Human Services. That number is a thirty-two percent surge from just one week ago.

On Tuesday, President Joe Biden sought to reassure Americans that the White House is fully prepared to handle the ever-growing health crisis.

“We have the tools to protect people from severe illness due to omicron—if people choose to use the tools,” he said. “There’s a lot of reason to be hopeful in (2022), but for God’s sake, please take advantage of what’s available.”

Biden noted that people who are fully vaccinated—particularly those individuals who already have received boosters—are highly protected against severe illness if infected with Omicron.

“You can still get Covid, but it’s highly unlikely, very unlikely, that you’ll become seriously ill,” he claimed, adding that the federal government has enough vaccines and booster shots for everyone in the country.

“We’re seeing COVID-19 cases among vaccinated workplaces across America, including here at the White House, but if you’re vaccinated and boosted, you are highly protected,” he continued.

Meanwhile, perhaps easing some concerns of the fast spread of Omicron, the World Health Organization on Tuesday said that more evidence is indicating that the Omicron strain causes milder symptoms than previous variants, resulting in a “decoupling” in some countries between high caseloads and lower death rates.

“We are seeing more and more studies pointing out that Omicron is infecting the upper part of the body. Unlike other ones, the lungs (that) would be causing severe pneumonia,” the World Health Organization's (WHO) Incident Manager Abdi Mahamud told reporters.

“It can be good news, but we really require more studies to prove that,” he added.