Omicron-Specific Boosters Are in the Works 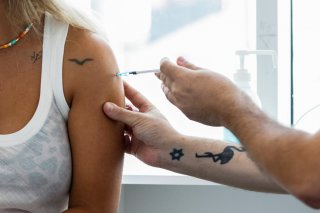 There’s currently a push to get those who have already received the coronavirus vaccines and go and get a booster shot. That was a big part of the winter COVID plan announced last week by the White House.

But just as that campaign is ramping up, the Omicron variant has emerged, putting into question whether yet another booster might be necessary at some point.

However, the companies also said that they indeed plan to move forward with the development of an Omicron-specific booster and that it will be ready in just over ninety days.

“The companies continue to advance the development of a variant-specific vaccine for Omicron and expect to have it available by March in the event that an adaption is needed to further increase the level and duration of protection—with no change expected to the companies’ four billion dose capacity for 2022,” the companies said in the Wednesday update. The CEO of Pfizer, Albert Bourla, had indicated as much in an interview with the Wall Street Journal the day before.

Moderna said in late November, not long after the first reports of the Omicron variant, that it too was working on an Omicron-specific shot, revealing that it was “already studying two multi-valent booster candidates in the clinic that were designed to anticipate mutations such as those that have emerged in the Omicron variant.”

The company said at the same time that it will “rapidly advance an Omicron-specific booster candidate,” and that Modern had already “demonstrated the ability to advance new candidates to clinical testing in 60-90 days.” Moderna does not appear to have listed a specific goal date for such a vaccine. Moderna said in September that it was working on a combination COVID-19 vaccine and flu shot.

NPR reported earlier in the week on what would be needed to determine that a new, variant-specific booster was needed. The main trigger, experts told the news outlet is whether the rate of people being hospitalized with the new variant is higher than it was with the previous one. The story also said that the mRNA technology used by the Pfizer-BioNTech and Moderna vaccines is “easier to switch to a new variant” than it has traditionally been for older types of vaccines.

Americans are advised to get the regular booster about six months after the date of their second shot.