The Omicron Variant Is Resistant to All Available Vaccines 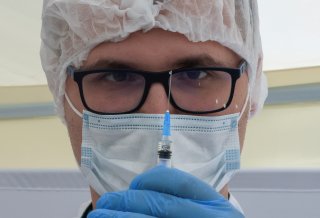 Since the Omicron variant arrived in late November, the biggest questions have been how fast it spreads, how severe the illness is that it causes, and how much resistance the existing vaccines provide.

Indications so far are that the virus spreads very quickly, but that it isn’t as deadly as prior variants. Now, a new study says the new variant may resist vaccines- to a “striking” degree.

A survey conducted by Columbia University and the University of Hong Kong found that the number of spike mutations “pose a threat to the efficacy of current COVID-19 vaccines and antibody therapies,” with the Omicron variant resistant to all available vaccines, as well as past infection.

“By evaluating a panel of monoclonal antibodies to all known epitope clusters on the spike protein, we noted that the activity of 18 of the 19 antibodies tested were either abolished or impaired,” the study said.

Another recent study, also from Hong Kong, found that the Omicron variant multiples itself seventy times faster in tissues that line people’s line airway passages while replicating ten times more slowly than the original coronavirus. However, those authors cautioned that virus replication isn’t the only major factor in the severity of the disease.

Neither study has yet been peer-reviewed.

The UK has been battling what’s been described as a “tidal wave” of Omicron infections. That country’s health secretary reported that Omicron accounted for 20 percent of cases in that country, with it likely to become the dominant variant in London by the end of the week.

“It’s spreading at a phenomenal rate, something that we’ve never seen before—it’s doubling every two to three days in infections,” Health Secretary Sajid Javid said Monday of the new variant. Prime Minister Boris Johnson has issued a goal of offering all adults in Britain a booster shot by the end of December.

Dr. Anthony Fauci said in interviews on Wednesday that Americans should get a booster shot as soon as they can.

“The message remains clear: If you are unvaccinated, get vaccinated,” Fauci, the White House’s chief medical advisor, said earlier this week. However, the government has not chosen to change the definition of “fully vaccinated” to include a third shot.

The CEO of the National Association of County and City Health Officials, Lori Tremmel Freeman, told CNN that while the Omicron variant now only accounts for 3 percent of U.S. cases, but those numbers could see double each day.

Meanwhile, some areas have added new restrictions, with some parts of California introducing mask mandates, and Philadelphia announcing that it will require proof of vaccination for indoor dining.