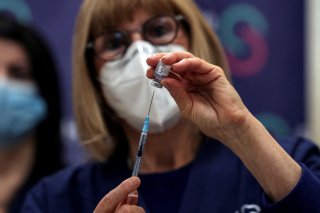 Through all of the nearly two years of the coronavirus pandemic to date, the daily case count has never hit anywhere close to 1 million—until Tuesday.

The report did note that the large number is in part due to some delayed reporting from last week, as some states did not report numbers on December 31, as it was New Years’ Eve.

In addition, the seven-day average of new cases is now 480,273, which is not only the largest ever in the United States, but the largest of that metric in any country since the start of the pandemic. And with the daily reaching over a million, that average is virtually certain to go up in the coming days.

The rising case counts of Omicron have made my parents nervous about whether their students should go back to school, or even whether doing so is possible. While many politicians, including President Joe Biden, have prioritized keeping schools open this winter, schools have had to close or go to virtual learning in some parts of the country, for the simple reason that so many teachers and staff are out with Omicron-caused COVID-19. Some cities are requiring negative COVID tests before students are permitted to return to class.

CNN recently looked at those dynamics and showed that experts are divided on whether it’s safe for schools to reopen in the current environment. Transmission of the Omicron variant is high in the majority of the country. In addition, hospitalization rates for children are at pandemic highs.

"We fear that it's going to get a lot worse, between getting together for the holidays and then getting back to school," Dr. Stanley Spinner, chief medical officer at Texas Children's Pediatrics & Texas Children's Urgent Care in Houston, told the news network.

Meanwhile, a report out of France reported on the existence of a new coronavirus variant. However, according to experts quoted by The Daily Mail, the new variant is “not worth worrying about," since the variant,  B.1.640.2, predates the arrival of Omicron but has not taken off and has “yet to cause chaos.”

That variant had “a decent chance to cause trouble but never really materialised,” Dr. Thomas Peacock, a virologist at Imperial College London, told the newspaper.