One More Reason You Don't Want to Catch the Delta Variant 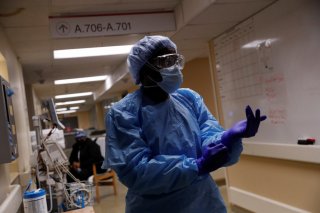 The World Health Organization (WHO) has warned that recently culled data from some countries suggest that the highly transmissible Delta variant likely increases the risk of hospitalization in those infected.

“In terms of severity, we have seen some countries suggest that there is increased risk of hospitalization for people who are infected with the Delta variant,” Dr. Maria Van Kerkhove, the WHO’s technical lead on COVID-19, said during a Tuesday press briefing.

However, “we haven’t seen that translate to increased death,” she added.

Van Kerkhove noted that similar to other strains, the Delta variant is particularly dangerous for individuals who have underlying health conditions, which can include obesity, diabetes, and heart disease.

“The risk factors for severe disease and death are the same,” she said. “If you have underlying conditions, no matter what age you are, you’re at an increased risk of hospitalization.”

The Delta variant, first detected by scientists in India last fall, has rapidly spread to more than one hundred forty countries so far. After being identified in the United States just a few months ago, the variant is now responsible for more than ninety percent of all sequenced cases, the U.S. Centers for Disease Control and Prevention (CDC) has stated.

According to the latest data compiled by the agency, the United States is currently witnessing roughly hundred thirty thousand new cases per day, which is more than 700 percent higher compared to the beginning of July.

In response to the Delta variant, top health officials in President Joe Biden’s administration are planning to announce that most Americans should get a coronavirus booster shot eight months after becoming fully vaccinated. The plan, which could be announced as soon as this week, would involve administering third shots beginning in September or October.

Earlier this week, Dr. Francis Collins, the director of the National Institutes of Health, indicated that new data out of Israel—which showed a reduction in the effectiveness of Pfizer’s vaccine against severe illness among seniors who were fully vaccinated in January or February—are indeed forcing health officials to rethink their position on booster shots.

“The people who got immunized in January are the ones that are now having more breakthrough cases,” Collins said during an interview on The Hugh Hewitt Show.

The latest estimates suggest that a shade over fifty percent of Americans are fully vaccinated against the coronavirus. While vaccinations have been increasing in recent weeks, millions are still firmly opposed to getting inoculated.

Since the beginning of the pandemic a year and a half ago, more than two hundred million people worldwide have become infected. Last week, WHO officials warned that the figure could easily reach three hundred million early next year.

“Whether we reach three hundred million and how fast we get there depends on all of us,” WHO Director-General Tedros Adhanom Ghebreyesus said.