Pelosi: All House Members Must a Wear a Facemask on Floor Thanks to Coronavirus 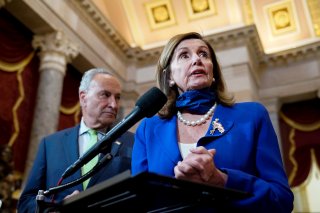 "Members and staff will be required to wear masks at all times in the hall of the House. Except that members may remove their masks, temporarily, when recognized,” she said on the floor.

Lawmakers are allowed to take off their masks when speaking.

"The speaker has the authority to direct the sergeant at arms to remove a member from the floor as a matter of decorum," Pelosi said.

House members are already encouraged to wear masks while in the chamber and forced to wear them during committee proceedings, but some congressional leaders don’t abide by that rule.

Any person who refuses to comply “will be asked to put on a face cover or leave the building,” according to a memo issued by the House sergeant-at-arms. The memo included some exceptions, including when a member or aide is drinking, eating, talking and being interviewed -- as long as people are standing six feet apart.

The policy went into effect at 8 a.m. ET Thursday.

Pelosi’s mask mandate came after Gohmert tested positive for the virus during a screening prior to taking a flight with President Donald Trump to Texas. Gohmert has consistently refused to wear a mask and social distance -- actions that frightened his congressional colleagues. Members who’ve recently interacted with Gohmert will now self-isolate.

Lawmakers and White House chief of staff Mark Meadows called for testing members of Congress because of the frequent interactions and travel being done during the pandemic. But, Pelosi and Senate Majority Leader Mitch McConnell (R-Ky.) have rejected this in the past and even refused to accept an offer from the administration to implement robust testing for members.

Pelosi and McConnell noted they want “to keep directing resources to the frontline facilities” who are struggling to combat the virus. The two added that they will wait until faster testing becomes “widely available.”

Despite their remarks, Meadows and other top lawmakers say discussions are in the works about required testing for members of Congress.

"Congress ought to start testing their members," Meadows said.

Senate Health Chairman Lamar Alexander (R-Tenn.) echoed Meadows’ concerns Wednesday, claiming he’s “said for weeks that I think it’s a good idea for us to be tested,” -- especially after a recess -- “so we’re not carriers coming back and forth.”

“We’re not mandating testing at this point … but we’re discussing that,” House Majority Leader Steny Hoyer (D-Md.) told reporters. “We have discussed it in the past. This is a moment, I think, where we ought to be discussing it again.”