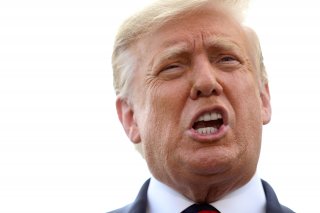 Amid the ongoing global coronavirus pandemic, the United States is viewed positively by only 34 percent of those surveyed in thirteen countries around the world, according to a new Pew Research Center poll that was conducted among 13,273 respondents from June 10 to August 3.

The only country to have a more positive than negative view of the United States is South Korea (59 percent view positively), and America’s reputation worldwide has plummeted to the lowest point since Pew began its survey nearly two decades ago.

For example, just 41 percent of respondents in the United Kingdom have a favorable opinion of the United States, which is the lowest percentage registered in any Pew poll there.

In France, only 31 percent see America positively, which is in line with the ratings from March 2003—the height of U.S.-France tensions over the Iraq War. In Germany, the percentage sits at a dismal 26 percent, similar to what was witnessed in the same 2003 poll.

What largely drove the decline over the past year can be attributed to how the United States and President Donald Trump handled the coronavirus pandemic. America has the biggest coronavirus outbreak in the world, with 6.6 million confirmed cases and more than 196,000 related deaths, according to the latest data from Johns Hopkins University.

“Across the 13 nations surveyed, a median of just 15 percent say the U.S. has done a good job of dealing with the outbreak,” the poll’s authors wrote.

“In contrast, most say the World Health Organization and European Union have done a good job, and in nearly all nations people give their own country positive marks for dealing with the crisis (the U.S. and UK are notable exceptions). Relatively few think China has handled the pandemic well, although it still receives considerably better reviews than the U.S. response.”

Trump has also seen his popularity sink throughout his presidency. He is most negatively viewed in Belgium, where only 9 percent say they have confidence in Trump to “do the right thing” in global affairs.

Across the thirteen countries, 16 percent said they have confidence in Trump in world affairs, making him the least-trusted of any world leader—even below Russian President Vladimir Putin (23 percent have confidence) and Chinese President Xi Jinping (19 percent).

Trump’s highest rating can be seen in Japan, although the percentage is still only 25 percent.

“Attitudes toward Trump have consistently been much more negative than those toward his predecessor, Barack Obama, especially in Western Europe,” the researchers wrote.

“In the UK, Spain, France and Germany, ratings for Trump are similar to those received by George W. Bush near the end of his presidency.”

German Chancellor Angela Merkel received the highest marks with 76 percent of respondents saying they have confidence in her.