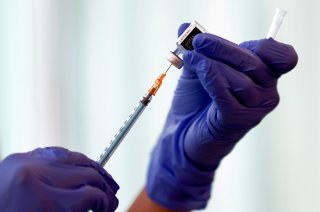 New data from the United Kingdom has found just how effective the Pfizer-BioNTech coronavirus vaccine can be in protecting individuals from the disease—even after just one dose.

A recently released Public Health England research paper that tapped into data of 7.5 million people showed that both Pfizer-BioNTech and Oxford-AstraZeneca vaccines are highly effective in reducing coronavirus infections among those aged seventy and over.

The study, which has yet to be peer-reviewed, further revealed that protection against symptomatic coronavirus infections four weeks after the first dose ranged between 57 percent and 61 percent for the Pfizer-BioNTech vaccine and between 60 percent and 73 percent for the Oxford-AstraZeneca shot. Moreover, vaccinated individuals had roughly half the risk of severe outcomes of coronavirus cases compared to those who weren’t inoculated.

“They may also help to explain why the number of COVID admissions to intensive care units among people over eighty in the UK have dropped to single figures in the last couple of weeks,” British Health Secretary Matt Hancock said in a media briefing.

The latest data compiled by the National Health Service show that more than twenty million Britons have received their first dose of a coronavirus vaccine, which represents over a third of the adult population, while eight hundred fifteen thousand have received their second dose.

Meanwhile, Johnson & Johnson’s coronavirus vaccine, which was approved for emergency use this past weekend by the U.S. Food and Drug Administration, was able to achieve an efficacy level of 66 percent against moderate-to-severe COVID-19.

Johnson & Johnson’s vaccine is different from the others currently available because it is a one-dose regimen and does not require patients to return for a second shot.

“It’s got greater than 85 percent efficacy (preventing) severe disease and critical disease, and there were no deaths or hospitalizations in any of the countries that were tested,” White House chief medical advisor Dr. Anthony Fauci recently said on ABC’s This Week.

Another major advantage of the new vaccine is that it can be stored at normal refrigeration temperatures for at least three months, making its distribution across the country considerably easier compared to the other vaccines on the market.

Johnson & Johnson has announced that about twenty million vaccine doses will be ready by the end of March, and the company’s executives have expressed confidence that they will be able to fulfill its promise of one hundred million doses by the end of June.