Refugees are an Asset, Not a Liability, in Germany’s Coronavirus Fight 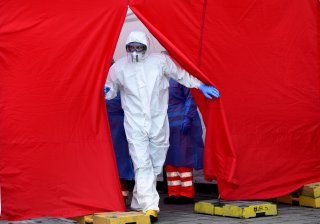 Five years ago, in one of the most controversial moves of her career, German Chancellor Angela Merkel opened Germany’s borders to over 1 million refugees. It’s a decision that nearly cost her a fourth term in office, and it drove her party to its weakest election performance in nearly seventy years.

Today, no western industrialized nation hosts more refugees than Germany. And of course, resettlement and integration efforts haven’t been uncontroversial. A 2017 campaign ad from the far-right Alternative for Germany (AfD) party read, “New Germans? We make them ourselves.” The first half of 2019 saw over 600 attacks on asylum-seekers and refugees, ranging from verbal abuse to arson. And despite Merkel’s sweeping 2015 welcome, some German states offered Syrian immigrants financial incentives to return to the war-torn nation.

But despite this rocky road, refugees have become some of the most eager contributors to Germany’s fight against the coronavirus.

News outlets around the world have showered the nation’s efforts with praise. But even still, according to Germany’s Federal Employment Agency, roughly 17,000 nursing positions across the country were unfilled as of December 2019. Worse yet, the Robert Koch Institute estimates that 2,300 German doctors are home sick or in quarantine as of April 14. In fact, it is likely that number is much higher. Thankfully, there’s an easy solution to this shortage––there are 14,000 Syrian refugee doctors in Germany waiting for their licenses to be approved.

The eastern state of Saxony jumped on the opportunity, issuing a call for unlicensed foreign doctors on Facebook. About 400 people expressed interest, many of whom were simply unlicensed by virtue of the labor-intensive accreditation process, which requires translations of previous work records and verification of proficiency in German. To get qualified doctors out on the frontlines, Saxony is now waiving licensing requirements and fast-tracking the training of hundreds of refugee medics. Several other states have also adjusted their policies, with Bavaria, for instance, granting immediate permission for unlicensed doctors to work in the state for a year.

The agricultural sector is likely to benefit from refugee workers, too. By May, Germany anticipates that it’ll be short 85,000 farm workers since it has closed its borders to the seasonal staff who normally come in from Eastern Europe. German Agriculture Minister Julia Klöckner proposed loosening employment restrictions on migrants so that some of Germany’s 150,000 refugees looking for work can fill these vacancies. Combined, more than 16,000 people thus far have answered the call for desperately needed agricultural and medical assistance. Among them are asylum seekers.

But even those who aren’t in the hospitals or in the fields are playing critical roles.

For instance, in Jüterbog, a small town near Berlin, refugees have been sewing face masks to alleviate a shortage at a local retirement home. Iranian refugee Babak Barz ran a sewing shop in Tehran for six years and is now leading that effort. His team has produced hundreds of face masks. Barz even brought masks to the nearby town of Luckenwalde, a gesture that Mayor Elisabeth Herzog von der Heide called “an excellent gift during the crisis and times of uncertainty for people.” For Barz, it’s simply about pitching in to help out his new home: “I thought, I have some experience with this kind of work, so I can also help.”

Perhaps Ahmad Dahhan, a former gynecologist in Syria and one of Saxony’s newest medical volunteers, illustrated this attitude best when he said, “It is extremely discouraging to know that I could be doing something far more useful. So I welcome the opportunity to be able to do so and hope that will help Germany recognize we can also be helpful even when there is not a crisis on.”

And indeed, they can be. Refugees are making Germany better in this time of need, bringing strengths from their native countries and filling in critical gaps in labor in their adopted one. Though cultural differences have made integration a difficult process, refugees have shown that, given the chance, they’re eager to assist Germany however they can. It seems they’d be only too happy to keep pitching in.

Fiona Harrigan is a contributor for Young Voices and a political writer based in Tucson, Arizona.