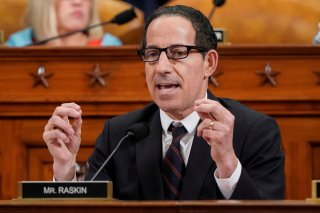 Representative Jamie Raskin (D.-MD) believes that “we’ve let huge holes form in our social contract. The fact that we’re the wealthiest country in the history of the planet, but we don’t provide guaranteed healthcare for everybody—that’s a real problem.”

In an interview with Ploughshares Fund’s Joe Cirincione on the podcast Press The Button, the representative from a Maryland district that borders Washington, DC said, “It’s not just a problem for the people who don’t have health insurance, it’s a problem for the rest of us.”

“Because if the COVID pandemic has shown nothing else, it’s that my health is totally related to your health,” he continued. “And your health is related to everybody else’s health. So, we want everybody to be healthy. Most civilized nations have figured that out.”

Raskin was one of eighty members, supported by over nine hundred outside groups, who sent a letter to House leadership on April 10 backing a set of five guiding principles for the next package of coronavirus aid and economic relief. Access to healthcare—particularly free, widespread COVID-19 testing and affordable treatment options—was at the top of the list, followed by a slew of progressive measures relating to the economy and election security.

For Raskin, the widespread support for these principles is explained by new realities, both practical and political.

“It is such an obvious point that our public health is completely intertwined with our economic and national security,” he said. “We can be voting $2 trillion bailout packages, either on a top-down Republican philosophy or a bottom-up Democratic philosophy, for perpetuity if we don’t deal with the pandemic itself.”

“In other words, we have got to solve the public health crisis, or we will bankrupt ourselves.”

Raskin, a member of both the House leadership and the Congressional Progressive Caucus, believes the left-leaning nature of the principles outlined in last week’s letter reveals a political shift within the Democratic Party. “When we get through this, we’re going to be in an age where the progressive spirit is dominant,” he said.

“It may be that the COVID crisis was able to do, in the final analysis, what Bernie Sanders’ campaign didn’t do,” Raskin continued, pointing to the massive rise in unemployment since the pandemic started and the corresponding spike in the medically uninsured.

“That’s a huge bureaucratic problem. And it’s a huge public health problem, and a moral problem, and a political problem,” he said. “At a certain point, we just have to say we are one society, and there are certain basic functions that we have to use government to meet.”

One of those functions is ensuring the ability of everyday Americans to vote safely, an activity suddenly threatened by the coronavirus. Wisconsin’s presidential primary last week demonstrated the issues clearly. Out of 180 polling sites in Milwaukee, only five were open.

“The Wisconsin primary . . . was a nightmare,” said Raskin. “Precinct polling places across the state were closed because they couldn’t get anybody to go work the polls.” The average precinct worker in the United States is in their mid-to-late sixties, meaning election day staffers are particularly vulnerable to the virus.

“Mail-in voting works,” he explained, pointing to states like Oregon, Washington, and Utah where the practice is widespread. “The voter turnout is much higher under mail-in voting than in states that just have the traditional ‘show up at the polling place on election day.’”

Raskin admitted this solution isn’t without its logistical hurdles. Many states have no prior experience with mail-in voting on such a massive scale, while the voters themselves would need education on how to ensure their ballots are counted.

More daunting still is the political opposition. Republicans have traditionally resisted widespread mail-in voting, with President Trump claiming the practice is “ripe for fraud.” To implement the practice by November, states would need billions of dollars in federal funding. And with Republicans in control of the Senate and White House, that seems unlikely.

Still, Raskin was undeterred. “Logically, their position is completely indefensible,” he said. “Already people are expressing in public opinion polls that they are afraid to go vote.”

“Why do we need to go through that?” Raskin asked. “We have a very simple option here.”

Zack Brown is a policy associate at Ploughshares Fund.

Joseph Cirincione is the President of the Ploughshares Fund.