Study: 80 Percent of All Coronavirus Infections Come from These Places 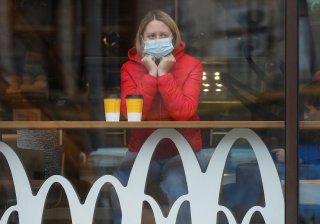 Restaurants, religious organizations, hotels, motels, doctors’ offices, cafes, and grocery stores have been found to be responsible for roughly 80 percent of all novel coronavirus infection transmissions, according to a new study conducted by researchers at Stanford University, Northwestern University, and the Chan Zuckerberg Biohub.

The peer-reviewed research, which was published in the journal Nature, tapped into cell-phone mobility data from ten large U.S. cities—Atlanta, Chicago, Dallas, Houston, Los Angeles, Miami, New York, Philadelphia, San Francisco, and Washington, DC—from March to May of this year.

In all, the wide-ranging study followed the movements of ninety-eight million people to and from indoor public spaces.

“Derived from cell-phone data, our mobility networks map . . . people from neighborhoods (census block groups, or CBGs) to points of interest (POIs) such as restaurants and religious establishments, connecting 57,000 CBGs to 553,000 POIs with 5.4 billion hourly edges,” the study’s authors wrote.

“We show that by integrating these networks, a relatively simple SEIR model can accurately fit the real case trajectory, despite substantial changes in popular behavior over time.”

Full-service restaurants were deemed by the study to possess the highest rate of infection transmissions.

The researchers contended that cell-phone mobility data has the potential to accurately predict new coronavirus cases and future outbreaks, and they were able to settle on the fact that “a small minority of super-spreader (events) account for a large majority of infections.”

The study added that limiting maximum occupancy at restaurants and other indoor spaces would be more effective in battling the pandemic than reducing the mobility of citizens. For example, “capping at 20-percent maximum occupancy in the Chicago metro area cut down predicted new infections by more than 80 percent but only lost 42 percent of overall visits.”

“Our results can guide policymakers seeking to assess competing approaches to reopening,” the authors continued.

“Despite growing concern about racial and socioeconomic disparities in infections and deaths, it has been difficult for policymakers to act on those concerns; they are currently operating without much evidence on the disparate impacts of reopening policies, prompting calls for research that both identifies the causes of observed disparities and suggests policy approaches to mitigate them.”