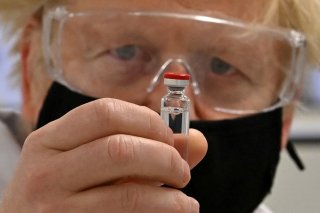 In order to avoid a third wave of the months-long coronavirus pandemic, the United Kingdom must vaccinate two million people a week, a new study by the London School of Hygiene and Tropical Medicine (LSHTM) has concluded.

The research comes as Britain has now recorded more than 2.4 million coronavirus cases and 71,000 related deaths, according to the latest data compiled by Johns Hopkins University.

“The most stringent intervention scenario with tier four England-wide and schools closed during January and two million individuals vaccinated per week, is the only scenario we considered which reduces peak ICU burden below the levels seen during the first wave,” the study wrote.

“In the absence of substantial vaccine rollout, cases, hospitalizations, ICU admissions, and deaths in 2021 may exceed those in 2020.”

The study, which has not yet been peer-reviewed, added that reaching the two-million vaccination mark on a weekly basis “is predicted to have a much more substantial impact.”

Earlier this month, the United Kingdom became the first country in the world to start inoculating its citizens against the novel coronavirus when it rolled out to the public vaccines developed by Pfizer and BioNTech.

Reports are also indicating that the United Kingdom will green-light the Oxford-AstraZeneca coronavirus vaccine around January 4, with its approval by the country’s medical regulator expected within days.

The recent discovery of a variant of the coronavirus, which could be up to 70 percent more transmissible, has prompted more stringent social distancing measures for London and southeast England. About half of England is under the nation’s strictest lockdown measures and people have been ordered to stay at home.

On Tuesday, there were 53,135 new lab-confirmed coronavirus cases—the highest figure yet on a single day. The National Health Service has confirmed that there are now more than 20,000 patients in English hospitals, which surpasses the numbers witnessed at the peak of the pandemic in April.

“We are entering a very dangerous new phase of the pandemic, and we’re going to need decisive early national action to prevent a catastrophe in January and February,” Andrew Hayward, professor of infectious disease epidemiology at University College London, said in a recent interview with the BBC.

Current studies are supporting the concern that the new mutant virus may be more than 50 percent more contagious than the already rapidly spreading strains in widespread circulation. Despite bans on British travelers in many countries, the variant continues to cross borders with relative ease.

The new variant on Tuesday was discovered in Colorado, state officials said, marking the first time this particular virus strain has been officially documented in the United States.

Colorado Gov. Jared Polis said that the individual who tested positive is in his twenties, has not been traveling, and is currently isolating.

“The individual has no close contacts identified so far, but public health officials are working to identify other potential cases and contacts through thorough contact tracing interviews,” a statement read.