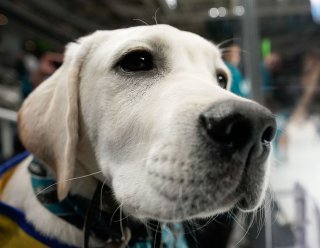 With only a week of training, dogs were capable of pinpointing individuals infected with the novel coronavirus at a success rate of 94%, according to a new German study.

The study, conducted by the University of Veterinary Medicine Hannover in cooperation with the German Armed Forces, discovered that with proper training, dogs can detect the presence of the coronavirus in human saliva.

“We think that this works because the metabolic processes in the body of a diseased patient are completely changed,” Professor Maren von Koeckritz-Blickwede said in a YouTube video about the project.

“We think that the dogs are able to detect a specific smell.”

Von Koeckritz-Blickwede added that the next step would be to train the dogs to differentiate coronavirus samples from other contagions like influenza.

These dogs, which have a sense of smell thousands of times more sensitive than humans, could be eventually deployed to detect coronavirus infections at airports, border crossings and sporting events, according to researchers.

The researchers said that dogs are able to identify certain “specific scent imprints” that are present in respiratory infections brought on by the novel coronavirus.

“Dogs devote lots of brainpower to interpreting smells. They have more than 100 million sensory receptor sites in the nasal cavity as compared to 6 million in people. The area of the canine brain devoted to analyzing odors is about forty times larger than the comparable part of the human brain. In fact, it’s been estimated that dogs can smell anywhere from 1,000 to 10,000 times better than people,” according to VCA Animal Hospitals.

“Unlike humans, dogs have an additional olfactory tool that increases their ability to smell. The organ serves as a secondary olfactory system designed specifically for chemical communication.”

In another recent study, the University of Pennsylvania’s School of Veterinary Medicine announced that it would launch a research initiative that utilizes scent-detection dogs to differentiate between coronavirus-positive and negative patients via saliva and urine samples.