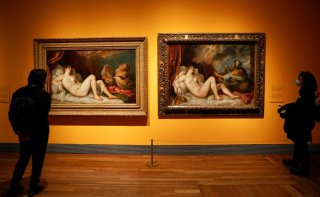 If you’re seeking a safe indoor activity with family or friends amid the ongoing coronavirus pandemic, then museums appear to be the perfect answer, according to a new study out of Germany.

Researchers at the Berlin Institute of Technology (TU Berlin) found that virus-laden aerosol particles were observed in smaller quantities in museums compared to grocery stores, restaurants, offices, and on public transportation.

The analysis considered the average length of stay in a given space—for example, two hours at a museum, eight hours in an office, and one hour in a supermarket. The other variables included the quality of the airflow, the type of activity carried out in the space, and the amount of aerosol particles inhaled by individuals in a room.

“What is clear from the study is that it is above all the situations in which we like to be that are unfavorable,” the study’s lead author Martin Kriegel told a German news outlet.

“Situations in which many people come together in a confined space—there you cannot ventilate sufficiently. It will always be an unfavorable situation.”

The study’s findings seem to support museums that have for months continued to ask governors and public health officials to remain open.

“It’s frustrating to see crowded shopping malls and retail spaces and airports, yet museums are completely closed and many have not been able to reopen at all for the last ten months. . . . There is a unique impact on museums,” Celeste DeWald, the executive director of the California Association of Museums, recently told the New York Times.

“The wildly uneven criteria speak more to the powerful, well-funded lobbies helping shape public health policy than to anything resembling science or even common sense,” she wrote.

“At a moment in which it is possible to get a tattoo or paw the goods at Chanel in Beverly Hills, it should be possible to visit a museum. Period.”

It added that limiting maximum occupancy at restaurants and other indoor spaces would be more effective in battling the pandemic than reducing the mobility of citizens. For example, “capping at 20 percent maximum occupancy in the Chicago metro area cut down predicted new infections by more than 80 percent but only lost 42 percent of overall visits,” the study’s authors wrote.