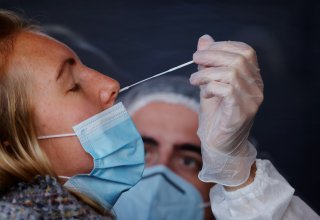 Nearly one in five coronavirus patients have been found to develop mental illness within ninety days of testing positive for the virus, according to a new peer-reviewed study.

The research, published in The Lancet Psychiatry, analyzed medical records of sixty-nine million people in the United States between Jan. 20 and Aug. 1. The data included sixty-two thousand individuals who were confirmed to have contracted the virus.

The researchers from the University of Oxford and NIHR Oxford Health Biomedical Research Centre eventually discovered that 18 percent of the people who survived the coronavirus, also known as COVID-19, received a psychiatric diagnosis within three months of getting infected. This figure is about double compared to other groups of patients with different illnesses and conditions, such as influenza, respiratory tract and skin infections, large bone fractures, gallstones, and kidney stones.

Anxiety, depression, and insomnia were most common among recovered patients in the study who developed mental-health problems. The data also showed significantly higher risks of dementia, a brain-impairment condition.

Moreover, those with a pre-existing psychiatric diagnosis were 65 percent more likely to be diagnosed with the coronavirus than those without—even when the known risk factors for the virus were taken into account.

Dr. Kaz Nelson, associate professor in the Department of Psychiatry and Behavioral Sciences at the University of Minnesota Medical School, told the National Interest that it is important to garner more scientific data on the connections between mental-health issues and the coronavirus.

“Psychiatric illnesses are common, associated with impaired quality of life and impaired functioning, and in some cases can result in death,” she said. “Psychiatric illnesses can sometimes make it more difficult to treat or address other co-occurring illnesses. Because the overall health impact is substantial to individuals, their loved ones, and the broader society, we must invest in scientifically understanding the relationship of psychiatric symptoms, psychiatric disorders, and infectious diseases, such as COVID-19.”

Nelson added: “Research like this, which attempts to measure the psychiatric consequences of COVID-19, is significant because mental health is a critical aspect of health, which can often be overlooked in favor of more easily measurable aspects of health, such as vital signs, laboratory values, or imaging studies.”

Paul Harrison, a professor of psychiatry at the University of Oxford and leader of the study, contended that more focus should be placed on ramping up services to help these individuals.

“People have been worried that COVID-19 survivors will be at greater risk of mental health problems, and our findings in a large and detailed study show this to be likely,” he said in a release. “Services need to be ready to provide care, especially since our results are likely to be underestimates of the actual number of cases. We urgently need research to investigate the causes and identify new treatments.”

Harrison added that there could be an array of factors driving forward these mental-health issues seen in patients. Some could potentially be the direct result of the neurological or biological effect of the virus, the drugs used to treat coronavirus-related complications or the worry and anxiety caused by contracting the disease. There could also be socioeconomic or behavioral factors that weren’t adequately captured by the study’s data.

David Curtis, retired consultant psychiatrist and honorary professor at University College London and Queen Mary University of London, believed that it is still too early to make a decisive call on the study’s findings.

“It’s difficult to judge the importance of these findings,” he said in a statement to the Science Media Centre in London. “These psychiatric diagnoses get made quite commonly when people present to doctors, and it may be unsurprising that this happens a bit more often in people with COVID-19, who may understandably have been worried that they might become seriously unwell and who will also have had to endure a period of isolation.”

Nelson seemed to agree that this particular study had several limitations and that more research needs to be pursued.

“It is difficult from a study like this to determine the specific relationship between the psychiatric symptoms and the COVID-19 diagnosis,” she told the National Interest.

“Are these psychiatric health consequences related to direct biological processes which impact the brain? Or, is a COVID-19 diagnosis psychologically devastating for a whole range of reasons, including the need for isolation, fear of infecting others, and possible associated discrimination? The answer to this question requires more investment and investigation, but is likely multifactorial, involving biological, psychological, and social contributing factors,” she said. “This study provides early data supporting the need to seriously study and consider psychiatric health as a component to COVID-19 diagnosis, treatment, and recovery.”