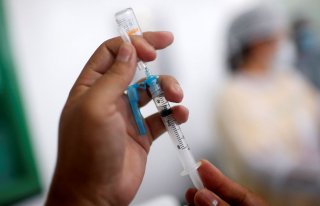 Roughly 30 percent of those who have recovered from a coronavirus infection return to the hospital within five months and one in eight die from complications of the disease, according to a new study out of the United Kingdom.

The research, which was published on a pre-print server but has yet to be peer-reviewed, discovered that out of 47,780 people discharged from the hospital, 29.4 percent were readmitted within a span of 140 days. Of the total, 12.3 percent of the patients ended up losing their lives.

Moreover, respiratory disease was seen in 14,140 of the coronavirus-positive cases after discharge from the hospital. Of that figure, 6,085 patients were shown to have no history of respiratory-related conditions. The study participants’ mean age was sixty-five.

The study’s author Kamlesh Khunti, a professor of primary care diabetes and vascular medicine at Leicester University, told the Telegraph that the research was the “largest study of people discharged from hospital after being admitted with COVID.”

“People seem to be going home, getting long-term effects, coming back in and dying,” he continued. “We see nearly 30 percent have been readmitted, and that’s a lot of people. The numbers are so large.”

“The message here is we really need to prepare for long COVID. It’s a mammoth task to follow up with these patients and the National Health Service is really pushed at the moment, but some sort of monitoring needs to be arranged.”

Khunti and his colleagues noted that they were surprised that many patients were readmitted to the hospital with a new diagnosis, adding that it was highly important to make sure that they were placed on protective therapies, including statins and aspirin.

“We don’t know if it’s because COVID destroyed the beta cells which make insulin and you get Type 1 diabetes, or whether it causes insulin resistance, and you develop Type 2, but we are seeing these surprising new diagnoses of diabetes,” he said.

“We’ve seen studies where survivors have had MRS scans and they’ve cardiac problems and liver problems. These people urgently require follow-up and the need to be on things like aspirin and statins.”

Dr. Charlotte Summers, a lecturer in intensive care medicine at the University of Cambridge, told the Guardian that more research is needed to get a better sense of the long-term effects of coronavirus.

“There’s been so much talk about all these people dying from COVID . . . but death is not the only outcome that matters,” she said. “The idea that we have that level of increased risk in people . . . particularly young people, it means we’ve got a lot of work to do.”