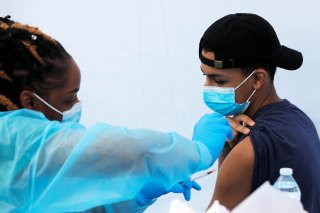 U.S. Surgeon General Vivek Murthy has given a stark warning regarding the deteriorating mental health of the nation’s teenagers and young people.

Murthy told National Public Radio on Tuesday that one in three high school students reported persistent feelings of sadness or hopelessness—a 40 percent increase from 2009 to 2019. In addition, suicide rates surged during that same time period by 57 percent among youths aged between ten and twenty-four.

Moreover, Murthy noted that the nearly two-year-long coronavirus pandemic has only made mental-health issues worse.

“This is a critical issue that we have to do something about now,” Murthy said. “We can’t wait until after the pandemic is over.”

“We also have to recognize that kids increasingly are experiencing bullying, not just in school but online, that they’re growing up in a popular culture and a media culture that reminds kids often that they aren’t good-looking enough, thin enough, popular enough, rich enough, frankly, just not enough,” he continued.

“Even to this day, even though I have parents who I know unconditionally loved me, I never felt comfortable telling them about it because I thought that this was my fault. I don’t want that to be the reality for my children, who are four and five and growing up, you know, in this very complicated world,” he added.

Murthy’s comments come as results from a new poll suggesting that the ongoing pandemic has taken a massive toll on most Americans—but the heaviest struggles are being experienced by the nation’s youths.

Overall, more than one-third of Americans between the ages of thirteen and fifty-six have cited the pandemic as a chief source of stress, according to a survey conducted by MTV Entertainment Group and the Associated Press-NORC Center for Public Affairs Research. But when it came to education, friendships, and dating, the impact was found to be more pronounced among those in Gen Z.

“Among Americans in Gen Z . . . 46 percent said the pandemic has made it harder to pursue their education or career goals, compared with 36 percent of Millennials and 31 percent in Generation X,” according to the Associated Press. “There was a similar gap when it came to dating and romantic relationships, with 40 percent of Gen Z saying it became harder.”

Similar findings were revealed earlier this year in a separate national study conducted by FAIR Health, which collects data for the largest database of privately billed health insurance claims in the United States.

What the researchers found was that in March and April of 2020, mental-health claims for those aged thirteen to eighteen approximately doubled compared to the year prior.