Thanks, Coronavirus: Yes, CVS and UPS Went to Deliver Your Medication by Drone 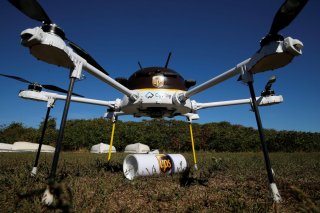 Delivery-by-drone has long been seen as a promising if not controversial technology of the future. Amazon announced in 2016 that it was working on a drone-based delivery service called Prime Air, which could perform deliveries within 30 minutes.

Prime Air has not yet launched in the United States, although Amazon last month announced that it was hiring a former Boeing executive as the new leader of the effort. The FAA has granted some licenses to U.S. companies to fly such devices, and while Amazon has not yet received one, it wrote a letter last year seeking such approval.

One company that is licensed to fly drones is UPS, which presumably is planning to eventually use them for standard package deliveries, but thus far has focused on deliveries of medicine. This week, UPS announced plans to deliver medications to residents at a retirement community in Florida.

The deliveries to The Villages will begin in early May. But they won’t go straight to customers’ doors. At first, the drones will land “near” the retirement community, with ground vehicles doing the actual deliveries.

UPSFF was the first “drone airline” to receive the FAA’s Part 135 Standard certification. This allows the company to operate at night, over people, with cargo weighing more than 55 pounds, and out of the operator’s line of sight.

UPS has teamed with CVS on such programs before, starting last November when they delivered medications in Cary, N.C. They have also worked together in the San Diego area. UPS has also partnered with Virginia’s Center for Innovative Technology (CIT) to “determine how unmanned aerial systems can assist medical professionals in their fight to stop the spread of the Coronavirus.”

“Our new drone delivery service will help CVS provide safe and efficient deliveries of medicines to this large retirement community, enabling residents to receive medications without leaving their homes,” Scott Price, UPS chief strategy and transformation officer, said as part of the announcement.

“UPS is committed to playing its part in fighting the spread of Coronavirus, and this is another way we can support our healthcare customers and individuals with innovative solutions.”