These Face Masks Light Up After Detecting COVID-19 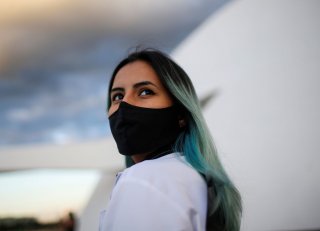 Scientists from Harvard and MIT are developing groundbreaking technology that would enable face masks to light up when they detect the novel coronavirus.

For the past six years, the research team has focused on making sensors that can detect viruses, including the ones that cause Zika and Ebola. Now, they are adapting that technology to tackle today’s pandemic.

The team is aiming to create a face mask that is able to produce a fluorescent signal when an individual infected with COVID-19 breathes, coughs or sneezes. If the technology proves to be successful, it could be deployed for a variety of uses.

“As we open up our transit system, you could envision it being used in airports as we go through security, as we wait to get on a plane,” Jim Collins, whose bioengineering lab at MIT began work on the sensors in 2014, told Business Insider.

“You or I could use it on the way to and from work. Hospitals could use it for patients as they come in or wait in the waiting room as a pre-screen of who’s infected.”

Collins admitted that this project is in the “very early stages,” but the progress has been encouraging. More recently, the team has been testing the sensors’ ability to detect COVID-19 in a small saliva sample.

The team is also debating whether to embed the sensors to the insides of masks or create a module that can be attached to any face mask available on the market. There are high hopes to demonstrate a functional mask within the next several weeks.

“Once we’re in that stage, then it would be a matter of setting up trials with individuals expected to be infected to see if it would work in a real-world setting,” Collins said.

Once the sensors detect a trace of the coronavirus, they will give off a fluorescent signal within one to three hours, which is considerably less time than the 24 hours it generally takes to run current tests for the virus. There have been instances in which patients didn’t receive results for several days.

The sensors consist of virus-binding genetic material—DNA and RNA—which is freeze-dried onto fabric using a machine called a lyophilizer. The moisture is sucked out of the genetic material without destroying it.

In order to be activated, the sensors need moisture and be able to detect the virus’ genetic sequence. The moisture can come from saliva or mucus.

The masks have a relatively long shelf life because the genetic material can remain stable at room temperature for several months.