Is the Trump Administration Giving Up on Trying to Limit Coronavirus Spread? 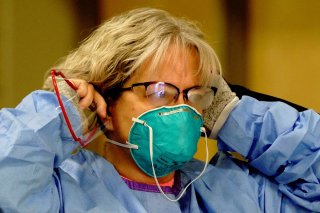 As new coronavirus cases continue to surge across the country, White House chief of staff Mark Meadows has admitted that the United States won’t be able to “control” the outbreak.

When asked why controlling the pandemic is out of the question, he responded: “Because it is a contagious virus just like the flu. What we need to do is make sure that we have the proper mitigation factors, whether it’s therapies or vaccines or treatments to make sure that people don’t die from this.”

With fall holidays like Halloween and Thanksgiving fast approaching, the United States is likely already mired within a third wave of the pandemic and there are no signs that the spread is slowing.

According to Johns Hopkins University data, over the past week, the country has reported an average of 68,767 new cases per day—the highest seven-day average since the pandemic began nine months ago. In all, the United States has witnessed roughly 8.7 million confirmed cases and at least 225,000 related deaths.

Democratic presidential nominee Joe Biden was quick to jump on Meadows’ comments, calling them a waving of “white flag of defeat.”

That sentiment was echoed by Dr. Jason Keonin, a physician and surgeon at Northwest Iowa Surgeons PC in Spencer, Iowa.

“It sounds to me exactly like the administration is throwing in the towel on limiting the spread of COVID-19, which is a terrible thing to be saying now, right as our cases continue to climb,” he told The National Interest.

“We know from the examples of other countries like South Korea and New Zealand that there are effective ways of limiting the spread. So, it can be done, but we have just chosen not to.”

Like White House coronavirus advisor Dr. Anthony Fauci, Keonin would like to see a nationwide mask mandate, enforced social distancing, more restrictions on major gatherings, and improvements made to testing and contact tracing.

“And that’s basically because we haven’t received a coordinated response from our leaders. … I think the American people are smart enough and have the will to do what needs to be done. They just need someone to lead them and show them the way. We can’t just wish the virus away or wait for a miracle cure.”