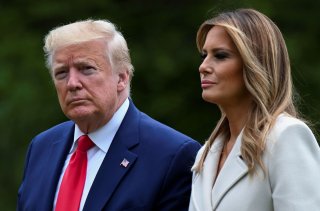 President Donald Trump and first lady Melania Trump have tested positive for the coronavirus, pushing the nation into another period of uncertainty in terms of the country’s leadership, as the virus’s death toll outstrips 208,000 people and millions remain sickened from the deadly disease.

President Trump, seventy-four, was diagnosed after a suspenseful evening when a close aide to the president, Hope Hicks, tested positive Thursday morning. Hicks is among Trump’s closest staffers to have contracted the virus. The two of them had been aboard Air Force One and Marine One this week together and attended a campaign rally in Minnesota on Wednesday. The president took to Twitter to break the news, assuring the nation that the first couple “will get through this.”

“Tonight, @FLOTUS and I tested positive for COVID-19,” Trump tweeted, “We will begin our quarantine and recovery process immediately. We will get through this TOGETHER!”

Just moments later, White House physician Dr. Sean Conley released a statement, noting that Trump and the first lady “are both well at this time, and they plan to remain at home within the White House during their convalescence."

“The White House medical team and I will maintain a vigilant watch, and I appreciate the support provided by some of our country’s greatest medical professionals and institutions. Rest assured I expect the President to continue carrying out his duties without disruption while recovering, and I will keep you updated on any future developments," Conley added.

The first lady also added to the Twitter feed and echoed the president’s remarks, saying “we are feeling good.” Melania reported that like “too many” other Americans, she and her husband would quarantine for the proper amount of time, forcing her to postpone “all upcoming engagements.”

Both Trump and Melania have come into close contact with dozens of people on the campaign trail, considering there are only thirty-two days until Election Day. The news comes after he told an audience Thursday night that “the end of the pandemic is in sight.” The president and his entourage also flew to New Jersey for a fundraiser at his golf club in Bedminster on Thursday after hearing of Hicks’s diagnosis, where he came into close contact with a number of other people, including campaign supporters. Officials close to Trump told The Washington Post that the president did not wear a mask at the event.

The New York Times reported that Trump is experiencing mild, cold-like symptoms Friday morning, but it’s unclear how far the infection has spread among the White House team. Vice President Mike Pence and second lady Karen Pence tested negative for the coronavirus on Friday, hours after news surfaced about the first couple. Pence’s press secretary Devin O’Malley took to Twitter to make the formal announcement, noting that the vice-president “wishes the Trumps well in their recovery.”

In the meantime, aides will continue to be tested and contacts traced for the virus, with the heavy encouragement to remain home in quarantine. All presidential and political travel will be temporarily canceled, according to The Washington Post, which will impose enormous pressure on Trump’s campaign trail during the last four weeks heading into the election.

Although he appears to be mildly symptomatic, the president will miss crucial time on his campaign trail against Democratic nominee Joe Biden. The White House did not indicate how long the first couple will remain contained, but it did cancel his in-person events for Friday in Florida, leaving the only measure on his public schedule a telephone call about “Covid-19 support to vulnerable seniors.” Other events for the weekend in key battleground states have also been squashed, posing a threat to his re-election chances in an already competitive race to the White House. The president has repeatedly downplayed the severity of the coronavirus since the start of the pandemic, as he’s said it was “going to disappear” and that it was “rounding the corner,” despite it infecting more than 7.2 million Americans.

Trump also mocked Biden at the first presidential debate for wearing a mask. The president has been known to question the effectiveness of masks and placed distrust in public health experts in combating the virus. “I don’t wear masks like him,” he said, referring to his political opponent. “Every time you see him, he’s got a mask.” It’s unclear if Biden has been infected by the coronavirus after coming into contact with the president Tuesday night.

The White House did not provide any statement regarding the next presidential debate on Oct. 15.

If Trump does appear to be severely symptomatic, considering he places in several high-risk categories for the virus, questions will arise if he should still plea for a second term in the White House.

It is unknown if Trump assumes any other health conditions that could place him in a high-risk group, but past physicals indicate a growing heart disease.

His most recent physical with Conley said “there were no findings of significance or changes to report,” as there were no signs of cancer, kidney disease, diabetes or other severe conditions. The physician did report, however, that his blood pressure was somewhat elevated.

Two years ago, Trump’s physical indicated that his coronary calcium CT scan score was 133, according to CNN. Anything in-between one hundred and three hundred “means moderate plaque deposits,” correlating with the threat of a heart attack or other form of heart disease within the next three to five years. In 2009, the president’s score was thirty-four and in 2013, it was ninety-eight, suggesting there’s been a build-up of plaque for a number of years.

Another area of concern was Trump’s cholesterol levels and his LDL, of “bad cholesterol,” as the figures both jumped in 2017 and 2018, with the president taking the statin drug that serves to lower cholesterol, called Crestor.

Trump and the first lady join the millions of people who have contracted the coronavirus in the United States, throwing the country in the lead for the number of reported cases.