Two More $1,400 Stimulus Checks Coming? Here's Why It Could Happen. 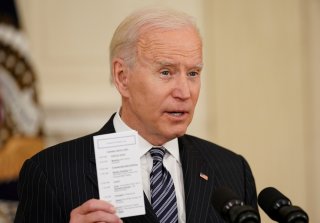 More rounds of coronavirus stimulus checks have the potential to lift twelve million Americans out of poverty, according to a new report by the Economic Security Project.

“Evidence from the last year shows stimulus checks to be the fastest and most impactful investments helping Americans get through this crisis, lifting more people out of poverty than any other single policy,” the report read.

It further revealed that an additional sixteen million Americans were lifted out of poverty due to the most recent $1,400 stimulus payments, which amount to nearly $850 billion in total. Currently, roughly 85 percent of those funds have been disbursed to financially struggling Americans.

The report touched on the first round of $1,200 stimulus checks, which only lasted about two to three months for most Americans. It noted that as the aid dissipated as summer wore on, eight million Americans were forced back into poverty.

The latest data compiled by the U.S. Census Bureau show that about thirty-four million people live in poverty in the United States.

In Washington, there appears to be growing support among Democratic lawmakers for more stimulus checks. Senate Finance Committee Chair Ron Wyden and twenty other senators had urged President Joe Biden to include recurring direct payments in his “Build Back Better” legislation.

“We urge you to include recurring direct payments and automatic unemployment insurance extensions tied to economic conditions in your Build Back Better long-term economic plan,” the senators’ letter to the president read.

In a separate analysis conducted by the Tax Policy Center at the Urban Institute & Brookings Institution, another round of stimulus payments has the potential to lift more than seven million people out of poverty.

“Another round of payments could lift an additional 6.6 to 7.3 million people out of poverty, depending on whether the payment was restricted to citizens or made available to everyone,” the team wrote.

But if two more additional stimulus checks were approved by Congress, more than twelve million Americans would no longer be mired in poverty. “Two such payments could reduce poverty to between 4.9 and 5.2 percent,” the study noted.

The researchers said that communities of color would see some of the highest benefits.