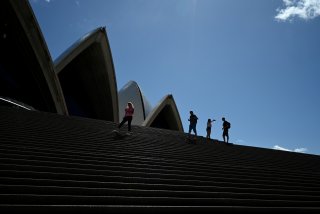 It’s safe to say that a lot of people think America bungled its response to coronavirus. The United States has lost 212,000 Americans, more deaths than any other country. In contrast, Australia is sitting pretty with less than a thousand deaths and a contracting, but not crashing, economy. Still, can we really call Australia a success story when Aussies have given up so many freedoms? The cost of coronavirus cannot be measured in merely coronavirus deaths and jobs lost. Tyranny comes with its own expenses.

It makes sense that people see Australia as a success story. After all, unemployment is only 6.8 percent compared with 7.9 percent in the United States. Only 895 Aussies have died from coronavirus—39 deaths per million, compared to 644 per million in America. But that’s just a small part of a grander story.

Coronavirus was not the only killer of Australians this year. Lockdowns have taken a very heavy toll. In a single Tuesday last month, Lifeline, Australia’s suicide hotline, received 3,326 calls, breaking the service’s fifty-seven-year record for calls in a day. The budget recognised this additional crisis and, according to the Australian treasurer Josh Frydenberg, the country doubled our medicare budget for mental health services this year. But the government is playing catchup as it tries to clean up its own mess.

Humans are not meant to be locked up for months at a time. Many haven’t seen their families in other states since before March. We have missed weddings, funerals, and last goodbyes.

In some cases, the restrictions that were meant to keep us safe have even proved fatal. Australia has some of the world’s strictest border restrictions in response to coronavirus. The Queensland state premier, Annastacia Palaszczuk coldly stated, “Queensland hospitals are for Queenslanders.” Later, she retracted her words after a pregnant woman living in a border community didn’t receive bureaucratic approval in time to cross from New South Wales to Queensland and her unborn daughter died.

In another state, Victoria, a fourteen-year-old autistic boy went for a run in the bushland. When he didn’t come back, his family and other volunteers started searching for him in earnest. But in Victoria, residents are only allowed to travel within five kilometers of their home for fear of the virus spread. They cannot go out after curfew or stay out more than two hours. Police sent the rescue teams home and refused to allow them to search. For their part, the police failed to find the boy in time, and he passed away.

In response to Australia's harshest lockdowns, many Victorians want to flee the state. My own real estate agent admitted their office has been overwhelmed with calls from Victorians wanting to sell their homes and move. While the Australian economy may as a whole bounce back eventually, Melbourne will bear the scars of coronavirus and the lockdowns for many years to come.

People do not want to live under tyranny. The costs are too high. Australians have lost freedom of association, freedom of movement and freedom of speech.

Many Aussies cannot even protest their lost freedoms. Consider the case of expectant mother Zoe Buhler, who posted a Facebook event for a freedom protest. The event encouraged attendees to take every safety precaution and was to take place in an area where gathering was technically legal. The police showed up at Buhler’s door, handcuffed her, and took her away for “incitement”—all in front of her two small children.

Before the United States starts calling for Donald Trump and Senate Republicans to consider safety first and to mimic the Australian system, they should consider the full costs of heavy-handed governance.

Some U.S. states attempted to restrict travel from other states only to learn it was unconstitutional, and many are trying to require two-week quarantines for interstate travelers. Thankfully, U.S. states haven’t started locking people in airless hotel rooms under military guard, but they are creeping in the Australian direction.

Henry Olsen said last week, “Australian conservatives know that the people want safety first, and they are willing to pay the price in lost economic output to provide it.” On paper, Australia looks good with our few coronavirus cases and a budget expected to boomerang the economy back into action. But we have lost so much more than jobs and GDP growth. If it appears that Aussies want safety first, it’s only because if we objected the police could show up at our doors.

Australia can no longer with any integrity call itself young, rugged, and free.

Emilie Dye is the Executive Director of the H.R. Nicholls Society, the Director of Policy for the Australian Taxpayers’ Alliance, and a Young Voices Contributor. Find her on Twitter @emilie_dye.