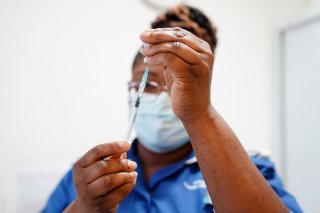 The United Kingdom has become the first country to sign off on a Covid vaccine that targets two variants, the Omicron strain and the original virus from 2020, according to a New York Times report.

Half of each dose of the vaccine will target the original variant, while the other half will target Omicron. In clinical trials, the vaccine generated a positive immune response in patients to the two variants, researchers said.

“An updated version of the Covid-19 vaccine made by Moderna that targets two coronavirus variants (known as a ‘bivalent’ vaccine) has today been approved for adult booster doses by the Medicines and Healthcare products Regulatory Agency (MHRA) after it was found to meet the UK regulator's standards of safety, quality and effectiveness,” read an official government release Monday.

Moderna also reported that its updated booster shot showed a “potent” response against the highly transmissible BA.4 and BA.5 subvariants.

Per BBC News, Health Secretary Steve Barclay said that it was “very good news for the UK population” and those eligible “will have the comfort of knowing that their immunity has been topped up.” He added that people will be contacted beginning in early September.

Stéphane Bancel, CEO of Moderna, wrote on Twitter that he was “delighted” that the vaccine had been approved.

“This represents the first authorization of an Omicron-containing bivalent vaccine, this bivalent vaccine has an important role to play in protecting people in the UK from Covid-19 as we enter the winter months,” he said.

The updated boosters will be rolling out in the United States as well. Late last month, the Biden administration confirmed that it plans to offer the retooled shots starting in September.

“We must stay vigilant in our fight against Covid-19 and continue to expand Americans’ access to the best vaccines and treatments,” HHS Secretary Xavier Becerra said in a statement. “As we look to the fall and winter, we’re doing just that—ensuring Americans have the tools they need to stay safe and help keep our nation moving forward.”