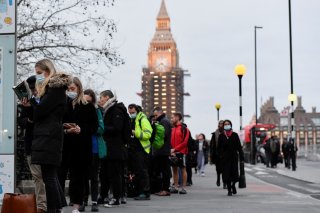 Jenny Harries, the CEO of the United Kingdom Health Security Agency, has warned that the new and highly mutated Omicron coronavirus variant is “probably the most significant threat” since the start of the nearly two-year-long coronavirus pandemic.

This particular variant—first detected in southern Africa about three weeks ago—is known to boast more than thirty mutations to the spike protein, which could be potentially associated with a decrease in antibody protection and higher transmissibility rates. Scientists worldwide are currently scrambling to collect and analyze data on the virus and the overall effectiveness of the currently available vaccines.

“I’m sure for example the numbers that we see on data over the next few days will be quite staggering compared to the rate of growth that we’ve seen in cases for previous variants,” she told a committee of British lawmakers on Wednesday.

“The real potential risk here—and I would underline that because we are still learning a lot about the variant—is in relation to its severity, clinical severity, and therefore whether those cases turn into severe disease, hospitalizations, and deaths. We’re still at too early stage for that. In fact, the world probably is still at too early stage to be clear,” she continued.

On Wednesday alone, the United Kingdom reported a record number of new daily cases with more than seventy-eight thousand, which marked a sizeable jump from just the day before when it registered nearly sixty thousand cases.

“We don’t know what’s going to happen,” Harries said. “But at the moment, the indications are it could be as big or even bigger than the previous wave this time last year. So, we’re preparing for that.”

Dr. Mike Ryan, the director of the World Health Organization’s (WHO's) health emergencies program, noted that the Omicron variant is doubling every two days or less in the United Kingdom.

Over the course of a week, “the actual number of cases can increase eight or tenfold and that’s what we’re concerned about,” he added.

Meanwhile, the WHO cautioned against treating the Omicron variant as a milder strain compared to Delta—again asserting that the virus can still cause severe, potentially deadly illness.

“We know that people infected with omicron can have the full spectrum of disease, from asymptomatic infection to mild disease, all the way to severe disease to death,” said Dr. Maria Van Kerkhove, the WHO’s COVID-19 technical lead.

“If a [health care] system is overburdened, then people will die. We have to be really careful that there isn’t a narrative out there that it’s just a mild disease,” she continued.