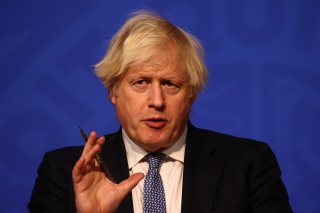 UK Prime Minister Boris Johnson confirmed on Monday that at least one person infected with the new and highly mutated Omicron coronavirus variant has died in the country—the first publicly confirmed death worldwide from the variant that was first detected in southern Africa three weeks ago.

“Sadly yes, omicron is producing hospitalizations and sadly at least one patient has been confirmed to have died with omicron,” Johnson told reporters, per Sky News.

“So, I think the idea that this is somehow a milder version of the virus, I think that’s something we need to set on one side and just recognize the sheer pace at which it accelerates through the population. So, the best thing we can do is all get our boosters,” he continued.

Johnson also expressed concern that early data is, in fact, showing that the effectiveness of a two-dose vaccine regimen is diminished by the new variant.

“No-one should be in any doubt: There is a tidal wave of Omicron coming,” he said. “But the good news is that our scientists are confident that with a third dose—a booster dose—we can all bring our level of protection back up.”

The United Kingdom has already reported more than three thousand one hundred cases of the Omicron variant—though it is likely that the actual number is much higher.

UK Health Secretary Sajid Javid told Sky News on Monday that “(the variant) is spreading at a phenomenal rate, something that we’ve never seen before—it’s doubling every two to three days in infections.”

Javid’s comments come as a new study by the University of Oxford has found that two doses of either the Oxford-AstraZeneca or Pfizer-BioNTech vaccine were substantially less effective at guarding against Omicron compared to previous variants of the coronavirus.

“This will likely lead to increased breakthrough infections in previously infected or double vaccinated individuals, which could drive a further wave of infection, although there is currently no evidence of increased potential to cause severe disease, hospitalization or death,” the study’s authors noted.

Meanwhile, White House chief medical advisor Dr. Anthony Fauci confirmed on Sunday that booster shots are considered to be “optimal care,” but the U.S. government is staying firm on the definition of fully vaccinated. Currently, two doses of the Pfizer-BioNTech or the Moderna vaccines or one dose of the Johnson & Johnson vaccine provide full vaccination.

“I think if you look at the data, the more and more it becomes clear that if you want to be optimally protected you really should get a booster,” Fauci told ABC News. “It’s the optimal care.”