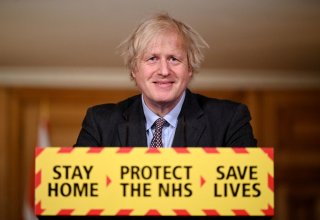 The first step will see schools reopen on March 8, while recreation in outdoor public places will be allowed between two people. By March 29, people will no longer be legally required to stay at home but will be advised to continue to work from home. In addition, outdoor gatherings of two households or six people will be permitted.

The second step will further lift restrictions on nonessential shops, hairdressers, and other businesses, which are slated to reopen from April 12. By June 21, the UK is confident that it can end all legal limits on mixing and reopen the last high-risk businesses like nightclubs.

“Today, I’ll be setting out a roadmap to bring us out of lockdown cautiously,” Johnson said in a statement, adding that the gradual easing of restrictions must be done in stages to avoid any surges in new infection waves.

“Our priority has always been getting children back into school which we know is crucial for their education as well as their mental and physical wellbeing, and we will also be prioritizing ways for people to reunite with loved ones safely.”

The new strain is now responsible for the majority of new infections in the United Kingdom.

“Our decisions will be made on the latest data at every step, and we will be cautious about this approach so that we do not undo the progress we have achieved so far and the sacrifices each and every one of you has made to keep yourself and others safe,” Johnson added.

The United Kingdom has been one of the hardest-hit countries of the ongoing pandemic, with the fourth-highest number of infections after the United States, India, and Brazil.

To date, the country has witnessed more than four million cases and a hundred twenty thousand related deaths, according to the latest data compiled by Johns Hopkins University.

In recent weeks, health experts have warned that the B.1.1.7 variant could become the dominant strain in the United States by next month. According to a study conducted by a group of scientists led by the Scripps Research Institute, confirmed cases of the UK coronavirus strain are now doubling about every ten days in the United States.