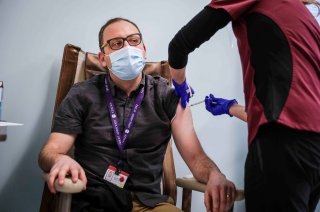 This past weekend saw long lines outside clinics from New York to San Francisco as the country’s vaccine supply struggled to keep up with the fast-rising number of monkeypox cases, CBS News has reported.

“We know that this is frustrating,” Dr. Rochelle Walensky, director of the Centers for Disease Control and Prevention (CDC), said in a call with reporters.

The health agency has now confirmed more than 1,800 monkeypox infections across more than forty states and admitted that it expects the outbreak to grow considerably due to the fact that symptoms of the virus usually start within three weeks of exposure. Individuals who don’t yet know that they are infected will likely seek medical attention and get tested in the coming weeks.

Globally, there are more than 11,000 cases of monkeypox across fifty-five countries.

Federal health officials have stated that another 131,000 monkeypox vaccine doses were made available to hard-hit states, bringing the total supply made available since May to more than 300,000 shots. Nearly seven million doses have been ordered, but most won’t be available for at least several more months.

“The window for getting control of this and containing it probably has closed, and if it hasn't closed, it's certainly starting to close,” Dr. Scott Gottlieb, former commissioner of the U.S. Food and Drug Administration (FDA), warned on CBS News on Sunday, adding that the United States does not have “adequate stockpiles” of vaccine doses.

In order to better understand the full scope of the monkeypox outbreak, Gottlieb and other health experts have contended that testing needs to be ramped up further and expanded beyond the gay and bisexual community.

“It's a fact that there's cases outside that community right now,” said Gottlieb, a physician who worked at the FDA under former Presidents Donald Trump and George W. Bush and now serves on the board of Pfizer. “We're not picking them up because we're not looking there. This has spread more broadly,” he added.

Gottlieb, though, was cautiously optimistic that the current outbreak won’t “explode like Covid.”

“This is a slower moving virus, which is why we could have gotten control of this if we had been more aggressive up front,” he said. However, Gottlieb warned that “we made a lot of the same mistakes that we made with Covid with this.”