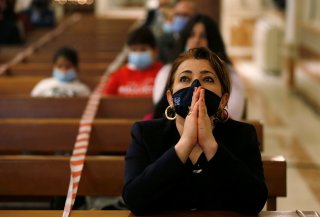 The new order permits houses of worship to reach 25 percent capacity, or up to a 250-person cap at one event, regardless of the size of the venue. The modification scratches the 50-person limit for religious gatherings that was previously put in place.

Other public places like restaurants, libraries and gyms also apply to the order, as they must operate at 25 percent capacity, with even the city’s largest restaurants prohibited to allow more than 250 people.

“The lawsuit argues that houses of worship and restaurants should be treated the same, or the same as other activities where the large gatherings limits are not imposed," the order says.

Bowser’s modification to the November restrictions took effect at 12:01 a.m. on Thursday, just a week before Christmas services are set to begin.

The Archdiocese of Washington’s lawsuit was filed Friday against the mayor in the U.S. District Court of the District of Columbia over attendance limits due to the coronavirus, arguing they are “chilling” and “discriminatory.”

“The archdiocese has shown that they can have mass and be socially distanced . . . so really what this boils down to is discrimination on the part of the city. They are choosing to treat the religious entities different from restaurants where you can sit down for ninety minutes with no masks or tattoo parlors or liquor stores,” Montse Alvarado, vice president and executive director of Becket Fund for Religious Liberty, a group that represents the Archdiocese of Washington, told FOX Business.

Although Bowser implemented the new order, public health officials disagreed with the Church’s concerns, urging residents in the region to socially distance or stay home to avoid a likely infectious wave expected after the holidays. The District of Columbia, Maryland and Virginia have all seen surges in cases in recent weeks following Thanksgiving celebrations.

“Large gatherings remain discouraged. With such a high rate of community transmission, some persons at large gatherings are likely to be exposed to the virus. Such exposure is likely even when a range of additional preventative actions are taken, such as adherence to social distancing rules,” the order says.

Bowser’s modification to the order comes after the Supreme Court’s conservative majority handed victories to religious leaders in Colorado and New Jersey, as they pleaded that their states’ pandemic-related restrictions disrupted religious freedom.

“A recent lawsuit appears to insist on a constitutional right to hold indoor worship services of even a thousand persons or more at the largest facilities, which flies in the face of all scientific and medical advice and will doubtless put parishioners in harm’s way,” the order says.