WHO: Omicron May Change Course of Pandemic 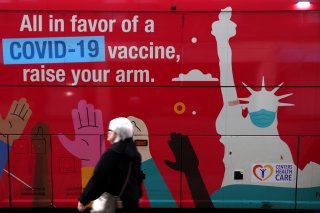 The World Health Organization has sounded the alarm that the highly mutated Omicron coronavirus variant that was first detected in southern Africa two weeks ago could change the course of the nearly two-year-long pandemic.

Although the exact impact is “still difficult to know,” WHO Director-General Tedros Adhanom Ghebreyesus noted during a press briefing Wednesday in Geneva that “certain features of omicron, including its global spread and large number of mutations, suggest it could have a major impact on the course of the pandemic.”

According to a WHO-released preliminary technical brief, “the likelihood of potential further spread of omicron at the global level is high,” adding that “omicron has an unprecedented number of spike mutations, some of which are concerning for their potential impact on the trajectory of the pandemic. If another major surge of COVID-19 takes place driven by omicron, consequences may be severe.”

The variant, which has been found in nearly sixty countries across the world, is appearing to quickly add to the daily caseloads seen in many nations. Last week, the WHO confirmed that there were more than four million new confirmed cases, while deaths increased by 10 percent from the week prior to nearly fifty-three thousand.

Dr. Maria Van Kerkhove, the WHO’s technical lead on the coronavirus pandemic, claimed during the briefing that preliminary evidence from South Africa suggests that omicron is milder than the delta strain. But he cautioned that it is “too early to conclude” that fact.

Early reports of Omicron not being as virulent as initially believed were supported by Dr. Rochelle Walensky, the director of the Centers for Disease Control and Prevention. Walensky confirmed that “the disease is mild” in almost all of the cases seen so far. The most common symptoms were cough, congestion, and fatigue.

“What we generally know is the more mutations a variant has, the higher level you need your immunity to be,” Walensky told the Associated Press.

“We want to make sure we bolster everybody’s immunity. And that’s really what motivated the decision to expand our guidance,” she added, referencing the recent approval of vaccine booster shots for all U.S. adults.

As for how the variant could affect the course of the pandemic in the United States, Walensky pointed to “how we come together” as a community will be key.

“When I look to what the future holds, so much of that is definitely about the science, but it’s also about coming together as a community to do things that prevent disease in yourself and one another,” she said.

“And I think a lot of what our future holds depends on how we come together to do that,” she concluded.