WHO: Omicron Spreading at Rate Never Before Seen in Any Other Variant 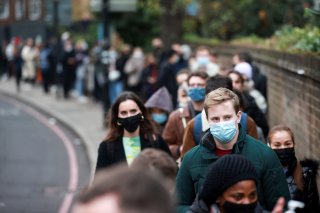 The World Health Organization (WHO) has warned that the new and highly mutated Omicron coronavirus variant that was first detected in southern Africa three weeks ago is spreading faster than any previous COVID-19 strain and is likely already circulating in every country across the world.

“Omicron is spreading at a rate we have not seen with any previous variant,” WHO Director-General Tedros Adhanom Ghebreyesus stated during a media briefing in Geneva on Tuesday.

“Seventy-seven countries have now reported cases of Omicron. And the reality is that Omicron is probably in most countries, even if it hasn’t been detected yet,” he continued.

Tedros added that the health agency is highly concerned by the fact that some countries are dismissing Omicron to be a milder form of a variant.

According to a WHO-released preliminary technical brief, “the likelihood of potential further spread of Omicron at the global level is high.” The technical brief notes that “Omicron has an unprecedented number of spike mutations, some of which are concerning for their potential impact on the trajectory of the pandemic. If another major surge of COVID-19 takes place driven by Omicron, consequences may be severe.”

Scientists worldwide have scrambled over the past several weeks to collect and analyze data on the virus and the overall effectiveness of the currently available vaccines, as there are increasing cases of community transmission with no links to international travel.

“We have learned by now that we underestimate this virus at our peril,” Tedros said. “Even if Omicron does cause less severe disease, the sheer number of cases could once again overwhelm unprepared health systems.”

He also asserted that vaccines alone won’t be enough to end the nearly two-year-long pandemic.

Meanwhile, in the United Kingdom, Prime Minister Boris Johnson confirmed on Monday that at least one person infected with the Omicron variant has died—the first publicly confirmed death worldwide from the new strain.

“I think the idea that this is somehow a milder version of the virus, I think that’s something we need to set on one side and just recognize the sheer pace at which it accelerates through the population,” Johnson told reporters, per Sky News. So, the best thing we can do is all get our boosters.”

“No-one should be in any doubt: There is a tidal wave of Omicron coming. But the good news is that our scientists are confident that with a third dose—a booster dose—we can all bring our level of protection back up.”