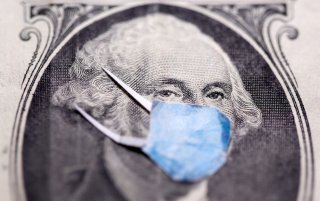 During a crisis as harrowing as the COVID-19 pandemic, it might be hard to dredge up concern over the national debt—but that doesn’t change the fact that it’s more pressing now than it’s ever been before.

The economic impact of the virus only added additional pressure to the national debt, standing at a staggering $24.3 trillion (and counting). Not to mention, last month, Congress passed the largest economic stimulus package in the history of the United States, with a price tag of over $2 trillion. In order to pay for this ever-increasing debt load, the federal government has three options: tax, borrow, or print.

But what if there were a fourth option wherein the government raised its own revenue?

Obviously, trying to pay down the national debt via taxation is tough going. Unemployment claims in the United States are sitting at 22 million as of mid-April, completely decimating a decade’s worth of job growth, and the economic rebound is likely to be a lengthy and painful process. So, then, increasing taxes wouldn’t just place an undue burden on citizens, it would also have a profound effect on consumption—which defeats the purpose of the Coronavirus Aid, Relief, and Economic Security (CARES) Act.

Of course, merely printing money isn’t a better solution. Thanks to inflation, it devalues people’s money in the long term and does little to alleviate the actual debt that accrues in the meantime. America is most likely to try borrowing money as many countries around the world are experiencing an economic slowdown, which may make the process painful as sources of credit begin to dry up. China, the world’s fastest-growing consumer market, experienced a 6.8% drop in GDP for the first time in 28 years.

None of these options for addressing the mounting national debt are very appealing, and each comes with its own costs and tradeoffs. That’s why America should use a fourth option at its disposal instead: raising its own revenue through the creation of a sovereign wealth fund.

What is a Sovereign Wealth Fund?

Sovereign wealth funds are governmentally-established investment bodies charged exclusively with investing in financial assets and securities for the purpose of returning a profit. Typically, they have no regulatory function or social mission other than profit maximization. They’re charged with preserving and increasing the value of public wealth.

In 1953, the country of Kuwait established the first-ever sovereign wealth fund—the Kuwait Investment Authority. Kuwait had massive oil reserves and wanted to invest its excess revenues to help diversify its assets and put its idle wealth to work. It now manages over 500 billion in assets. Since then, a number of other countries and jurisdictions, usually places with a significant amount of natural resources, have followed suit and established their own sovereign wealth funds. In 1983, Alaska became the first U.S. state to create a sovereign wealth fund, known as the Alaska Permanent Fund.

These funds have proven more than capable of managing large quantities of wealth and achieving fairly high rates of return. For example, Norway currently has the largest sovereign wealth fund in existence, totaling over $1 trillion in assets and boasting a 6.1 percent annual rate of return. Rates of return this high aren’t uncommon for sovereign wealth funds. The China Investment Corporation, the world’s second-largest fund, has a net cumulative return of 5.18 percent, and the Alaska Permanent Fund’s return over the past five years was as high as 7.13 percent. In fact, Alaska uses the profits made from the fund to pay citizens an annual dividend ranging from $300 up to as high as $2,000 per citizen.

Should the U.S. Government Establish Its Own Sovereign Wealth Fund?

In spite of these significant returns, the increasingly large national debt, and the ever-growing demand for new government programs, the federal government has yet to establish its own sovereign wealth fund. While it certainly wouldn’t solve the national debt crisis, establishing a federal investment body would provide another source of revenue that could help fund government initiatives in the presence of rapidly approaching fiscal constraints. Luckily, the U.S. government is in a uniquely strong position to do so.

As of 2019, the United States owned more than $3.9 trillion in assets, and that is before factoring in the massive reserves of natural resources that could be extracted from government-owned land. In 2013, the Institute for Energy Research estimated that there is over $128 trillion worth of government-owned gas and oil alone. If the government used just a small fraction of these resources to create its own fund, the returns could be massive. For instance, let’s say Congress leveraged as little as $1 trillion worth of these government-owned resources and invested just $100 billion a year, less than 3 percent of overall U.S. spending in 2019. Assuming a modest 5 percent interest rate, after 80 years, the fund would be worth about $150 trillion. That is over six times larger than the totality of our current national debt.

It wouldn’t be a silver bullet solving the problem of government debt, but it could certainly be a major step in the right direction, providing additional revenue at a time when more traditional funding prospects may be slimming.

As the COVID-19 pandemic continues to wreak havoc, it’ll become increasingly important for policymakers and government officials to start planning for the aftermath. Perhaps the national debt isn’t the most pressing issue on anyone’s mind right now, but it can’t be forgotten—especially when historic spending is underway. With everything going on, it may be time for the U.S. government to begin expanding its toolbox and looking for new and innovative ways to generate some sorely-needed cash.

James Czerniawski is a contributor with Young Voices. His work has appeared in the Salt Lake Tribune, Real Clear Future, Deseret News, Morning Consult, The National Interest, and other national publications. You can follow him on twitter @JamesCz19

Trace Mitchell is a Research Assistant with the Liberty and Law Center at George Mason University and a JD candidate at the George Mason University, Antonin Scalia Law School. He is also a Young Voices contributor, and his work has appeared in the Hill, National Review, RealClearPolicy, American Banker, Chicago Tribune, and various other publications nationwide.