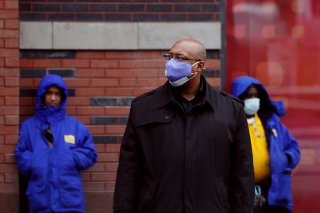 What if we develop a vaccine for COVID-19 but can’t find enough patients to run a randomized clinical trial? It sounds absurd, but this problem has happened in the past. Ebola was identified in 1976, and candidate vaccines were proven safe and effective in mice and primates in 2004 and 2005, respectively. But no human vaccine was produced because it was extremely difficult, bordering on impossible, to trial an Ebola vaccine. The problem? Ebola is so deadly that people take precautionary measures long before a vaccine can be tested.

Vaccines are intended to prevent disease in healthy people, so they’re tested for efficacy in healthy populations. But to test a vaccine, you need a population of still-healthy people who might get sick. An Ebola vaccine was eventually approved only because in 2014, in the midst of an Ebola outbreak, trials were started in Guinea. Even in these cases, however, there wasn’t enough time nor a large enough population to run a randomized, clinical trial—so an adaptive, ring vaccination trial was designed. The vaccine proved successful, at least under some statistical assumptions, and the vaccine was approved, but because the trial was not a pure randomized trial, the results remain controversial.

When a COVID-19 vaccine is available, it will be necessary to find a large population of people who are still at high risk of contracting COVID-19. This may be difficult. In developing countries, which may not be able to contain the virus, herd immunity may have developed. In richer countries, social distancing, testing and other measures may have made the probability of infection relatively low. China, for example, has tested a vaccine in primates. But China no longer has enough COVID-19 cases to test a vaccine in China. An Oxford group has started clinical trials in humans but if their vaccine isn’t very effective, they may need much larger samples to detect an effect. A natural group to consider for a vaccine trial would be health care workers.

Even health care workers, however, have a low enough infection rate that you either need many months to determine if there is a significant effect, or you need large populations. In Italy, about 6,000 doctors were infected over two months, out of a population of about 241,000 Italian doctors. This is a monthly infection rate of 1.2 percent. If the vaccine is 50 percent effective, then to detect this within a month, you need a sample size of 7,776 people equally divided between a vaccinated group and a non-vaccinated group. You could run the test in a smaller sample of 1,322 but then the trial would take six months. A more effective vaccine would make detecting an effect easier, but flu vaccines work at 40 to 60 percent effectiveness, so an assumption of 50 percent is not unreasonable.

But will Italian doctors still be getting infected at a rate of 1.2 percent per month when a vaccine becomes available for trial in six months or a year? We hope not. The hope is that social distancing and the use of personal protective equipment will have greatly lowered the infection rate. A low infection rate is great, unless you want to properly test a vaccine.

The efficacy-trial bottleneck motivates the use of challenge trials. In a challenge trial, healthy individuals are split into two groups, one half vaccinated, the other not, and then both groups are infected or “challenged” with the virus. No waiting for natural infections here. (Some healthy people also need to be infected prior to the trial to determine the appropriate dose of virus to match or not exceed the natural infection.)

The virtue of a challenge trial is that the results would be available very quickly, within a few weeks, and using only a small population. If the vaccine is 50 percent effective, for example, then we would need around 100 volunteers or perhaps even fewer depending on how many people exposed to the virus in laboratory conditions contract the disease.

By advancing a vaccine by many months, a challenge trial could save many thousands of lives and spare the world the huge economic costs of the lockdowns and social distancing that we will be using to combat the virus.

Challenge trials have been used many times in the past, including with Edward Jenner’s first cowpox vaccine for smallpox in 1796, but many people consider them a last-resort because of the ethical issues inherent in exposing healthy people to disease.

The risks to the challenged, however, can be minimized along several dimensions. First, COVID-19 mortality rates are much lower for healthy individuals under the age of forty, so volunteers would be carefully selected and closely monitored. For those individuals who contracted COVID-19, treatment could begin even before symptoms fully manifest by using an endpoint of viral load (particles). Volunteers could also be drawn from health care workers whose probability of contracting the disease at some point is already relatively high, thus minimizing the opportunity cost of the risk. We can also hope that by the time a candidate vaccine is ready for trial, there will be effective drugs and treatment regimes, again reducing the risk to the volunteers. It’s also important to remember that an ordinary vaccine trial is not without risk—a vaccine could backfire and make the disease worse—so exposing fifty or so volunteers to the virus in a challenge trial must be balanced against exposing thousands to a potentially dangerous vaccine in an ordinary clinical trial.

Is the risk to volunteers too high? Firefighters and physicians take on risk for the social good, as do kidney donors. Over a thousand people have already volunteered to be considered for a challenge trial. I believe that as with firefighters, physicians and kidney donors, we should accept the choices of the volunteers as rational and well informed. They should have our gratitude and our thanks.