Will Coronavirus Force Kids to Wear Masks When They Return to School? 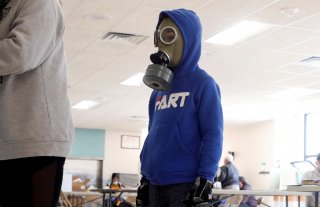 The coronavirus pandemic put a halt to the school year in most of the United States in March, with 40 states and Washington, D.C., already declaring that schools will not reopen for the remainder of the academic year.

With most American schools in "distance learning" mode, thoughts are turning to how the schools can safely reopen in the fall, and what precautions will need to be made to avoid further outbreaks.

In at least a couple of jurisdictions, that solution may involve students wearing masks.

Philadelphia's superintendent of schools, Dr. William R. Hite, Jr., said Thursday that when children in the district are allowed to return, they will "most likely" need to wear masks.

“We are planning as if … we would need masks for young people to show up for school," the superintendent said on a call with the press, as reported by the Philadelphia Inquirer.

Dr. Hite cited a color-coded system that Pennsylvania Gov. Tom Wolf had introduced earlier in the week for allowing counties in the state to reopen. The "green" phase, the least restrictive one, will require individuals and businesses to follow state and local recommendations, which include wearing masks in public, although Wolf’s plan doesn’t specifically mention masks in school.

The governor of neighboring New Jersey, Phil Murphy, said during a briefing this week that “I would bet the answer is yes, that we will be masked when kids go back to school. That will be my personal guess," per NJ.com.

Gov. Murphy did state that this was "an opinion, not a mandate."

The NJ.com story raised some practicality concerns about that sort of requirement, such as teachers needing to enforce mask usage in large classrooms, and that even though people are getting used to wearing masks for short periods of time, asking children to do so for entire days is another matter entirely.

Some school officials in the Cleveland area answered several questions from the Cleveland Plain Dealer about how school re-openings would work. In terms of masks in schools, they were non-committal, with the superintendent of the Shaker Heights City School District telling the newspaper that "it would be really helpful to have some clearer guidance from state or federal authorities about what would be expected by grade levels."

Other than that, it doesn't appear that any other high-ranking elected officials have yet addressed the possibility that kids will have to wear masks when they go back to school. But the subject is likely to be discussed further as we get closer to the scheduled return of school in the fall.