Will Democracy in Latin America Become Another Casualty of the Coronavirus? 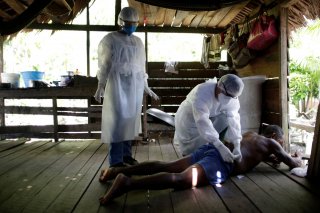 As the coronavirus continues to spread, America’s attention has been focused domestically. While policymakers must tend to the health, economic, and social impacts of coronavirus at home, they should not forget about the dangers that the pandemic poses abroad, including in our own neighborhood.

In Latin America, as in other parts of the world with weak institutions, the coronavirus is threatening democracy. The United States should stand up for the rule of law in El Salvador, Bolivia, and Brazil, three countries where American policymakers retain influence.

Democratic backsliding, a term describing the gradual rollback of institutions such as elections and legislatures, is not inevitable in Latin America. In the most optimistic scenario, coronavirus may even bolster democracies, as people vote out incompetent populists. While we can hope for the best, however, the United States should engage diplomatically to avoid the worst.

Following a civil war and a series of coup d’états in the twentieth century, El Salvador is a fledgling democracy. Trust in institutions is low and citizens are regularly subject to economic hardship and threats from gangs. In such a setting, Nayib Bukele’s intimidation of legislators and a worsening conflict with the judicial branch could mean a return to authoritarian rule.

U.S. diplomats have enough influence to challenge Bukele’s decisions, but they are reluctant to disrupt growing cooperation between the United States and El Salvador to limit immigration. Rather than viewing El Salvador through such a short-term lens, the United States should consider how El Salvador’s slide toward authoritarianism could lead to more emigration, not less, in the coming years.

To pressure Bukele into respecting his country’s institutions, the United States should use aid as a bargaining chip. Since 2016, the State Department has certified that El Salvador respects human rights and is therefore eligible for U.S. assistance. Diplomats should be more discerning when it comes to next year’s aid allocations, and they should work with Congress to reward incremental progress with greater funds. American development aid to El Salvador improves people’s lives directly, but it can also work indirectly—as long as the United States uses it as leverage for much-needed reforms.

Bolivia’s government, until last year, was led by Evo Morales, a socialist leader who was skeptical of the United States’ role in the region. After rigging an election in an attempt to stay in power, Morales faced international and domestic condemnation. The United States was key in pressuring him to resign.

Morales’ successor, Jeanine Áñez, was immediately recognized by the United States, consolidating her rule as interim president. Still, her tenure has been a contentious one. Many Bolivians question the circumstances of Morales’ departure, criticize Áñez’s repression of protests, and are upset at her decision to run for a full presidential term after pledging to serve as only a placeholder.

Given that the United States is partially responsible for the position that Áñez now occupies, it should exert its influence for the sake of safeguarding democracy. President Donald Trump was a sharp critic of Evo Morales’ abuses of power. If Áñez takes steps to undermine the next election in Bolivia, then the State Department and White House should be equally forceful in their condemnation. They can compound their influence through the Organization of American States, rallying allies to advocate for a free and fair election in Bolivia.

In Brazil, President Jair Bolsonaro has frequently defended the country’s twentieth-century military dictatorship, both before and after his provocative presidential campaign. While Brazil’s institutions may be stronger than those of El Salvador and Bolivia, the oblique threats of military intervention made by Bolsonaro’s closest advisors are cause for concern.

Trump’s friendship with Bolsonaro is well-documented but friends can sometimes be the most effective critics. Trump should urge Bolsonaro—behind closed doors—to be mindful of his country’s weak institutions. If the Brazilian armed forces threaten to insert themselves, then U.S. Southern Command must present them with an ultimatum: stay out of politics or endanger Brazil’s status as a major non-NATO ally. Congress can add a more forceful voice against backsliding in Brazil; Trump’s advice, by comparison, will look like a reasonable compromise for Bolsonaro.

Trump would be far from a model leader in criticizing El Salvador, Bolivia, and Brazil. His response to protests against police brutality is reprehensible, and his lies about US voter fraud and the extent of executive power have done lasting damage to the rule of law in the United States. However, Trump has not threatened the country’s legislative and judicial branches to the same degree that Nayib Bukele, Jennifer Áñez, and Jair Bolsonaro have threatened theirs. Paradoxically, Trump’s sympathy with right-wing populists may help him exert pressure in a way that traditional American leaders could not.

El Salvador, Bolivia, and Brazil are at great risk of democratic backsliding, but they are also subject to U.S. influence. The United States government must use that influence for good.

Bo Carlson is an intern at the Center for Strategic and International Studies (CSIS), where he focuses on global development.