Will Joe Biden Bring Republicans Into His Cabinet? It Seems Possible. 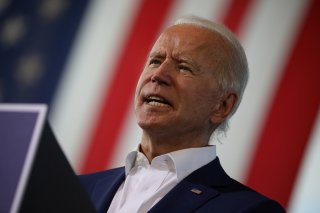 Biden has labeled himself as a president who will unify the divided and broken Capitol Hill during the 2020 election season, if elected on Nov. 3.

At a town hall event hosted by ABC News last week, Biden championed his own ability to reach across the aisle to pass legislation and govern, noting that one of the first actions he would take as president would be to contact GOP colleagues in the post-President Donald Trump era and ask, “‘Let’s get together. We've got to figure out how we’re going to move forward here.’ Because there are so many things we really do agree on.”

Despite his attempt at leading a bipartisan cabinet—a move that’s been practiced by past presidents like George W. Bush, Bill Clinton and Barack Obama—a handful of far-left members have already expressed avid disapproval of it, even if Biden chooses a more moderate Democrat, as it would garner distrust in the roots of the Democratic party.

“When it comes to including Republicans on his cabinet I think a lot will depend on who he selects and for what post,” Daniel Cox, a research fellow in polling and public opinion at the American Enterprise Institute, said. “No matter who Biden might select, I think the left-wing of the Democratic Party would not be thrilled if he nominated a Republican for one of the high profile cabinets offices, such as State or Defense.”

Left-wing lawmakers and progressive groups including Democratic Reps. Alexandria Ocasio-Cortez (N.Y.) and Ayanna Pressley (Mass.) convened to sign a letter on Friday, according to POLITICO, urging that no business executives or lobbyists should be granted Senate-confirmed positions in a potential Biden administration.

Michael Hanmer, government and politics professor and research director of the Center for Democracy and Civic Engagement at the University of Maryland, echoed Cox’s remarks by saying “who it is and in what position can matter a great deal” for progressives, but overall the “reaction from the left will be mixed.”

Although appointing GOP members to top cabinet positions is a way to reward those who have endorsed Biden’s presidential candidacy, it could worry or demobilize Democratic voters who see a Biden-led party as one that neglects progressive and far-left concerns.

But Hamner added that he doesn’t think Biden’s decision to include GOP lawmakers in top cabinet positions will pose a threat to far-left voting behavior, and instead, “The advantage to considering Republicans for his cabinet is to assure Republicans that he is sincere about working across the aisle. I think it could help convince some who don't like Biden’s policies, or just don’t like Democrats, that it is alright to vote for Biden.”

The experts also said that it probably won’t have too much of an impact on the undecided or swing voter.

“His promise to hire Republicans in his Administration will satisfy the small sliver of Never Trumpers who are voting for him anyway, but it will deflate his base, just as he needs to them to capture the White House,” John Feehery, Republican strategist and columnist at The Hill, said. “I personally think this is a blunder on his part.”

A Biden transition team spokesperson told POLITICO that they will not release decisions or names before Election Day, but emphasized that “diversity of ideology and background is a core value of the transition.” The publication speculated names that could be put on Biden’s cabinet including Meg Whitman, the CEO of Quibi and former CEO of eBay, former Ohio Gov. John Kasich—both of whom spoke at the Democratic National Convention—Massachusetts Gov. Charlie Baker (R), former Sen. Jeff Flake (R-Ariz.) and former Rep. Charlie Dent (R-Penn.), who became a lobbyist after leaving public office.

Cox said that announcing the names before Nov. 3 will not benefit his election bid.

“Biden is very actively wooing disaffected Republicans. Much of his campaign and his rhetoric are aimed at making direct appeals to these voters and making this type of announcement would be consistent with this overall approach,” Cox said. “However, this is so much inside baseball that I do not think Biden benefits much from announcing these candidacies in the next fourteen days.”

Biden has recently taken a break from in-person events on the final stretch of his campaign trail, as he prepares for the final presidential debate against Trump on Thursday night in Tennessee.  The former vice-president currently holds a double-digit national polling lead over Trump, just two weeks until Election Day.