Will Omicron be the Last COVID-19 Variant? Too Soon to Know, Experts Say 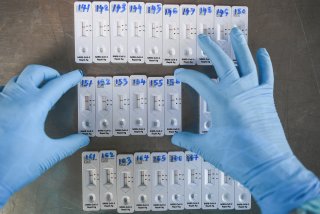 Ever since the Omicron variant arrived, some have speculated that the highly contagious variant could burn through the population in a few weeks, reach its peak, and eventually decline. That could leave a large percentage of the population with immunity, leading to the decline and end of the pandemic itself.

It’s not clear how likely this scenario is. But Dr. Anthony Fauci addressed it this week.

Speaking Monday at the World Economic Forum, as reported by the New York Times, Fauci said that he hopes the Omicron variant will function like a “live virus vaccination that everyone is hoping for,” although he added that it’s too soon to tell if that’s what will happen.

The fear, the White House chief medical adviser said, is that other variants will emerge, and that infection from Omicron will not confer immunity to those new strains.

The New York Times also reported that public opinion of the government response to the pandemic is less favorable. A recent CBS News/YouGov poll found that 36 percent of those asked believe the response is “going well,” while 49 percent approve specifically of the President’s handling of the pandemic, which is down from 66 percent last summer.

Meanwhile, CNBC reported that there are signs that the Omicron wave is beginning to peak in some of the areas where it first showed up. According to the Johns Hopkins University tracker, the U.S. has averaged about 800,000 cases per day of the virus for the past week, which nearly triples the then-records that were set last winter.

However, cases are beginning to drop in the Northeast, including in New York. That state’s average has been declining since hitting a peak on January 9, CNBC said.

“There will come a time when we can say it’s all over,” New York Gov. Kathy Hochul said Friday, according to CNBC. “We’re not there yet, but boy, it’s on the horizon and we’ve waited a long time for that.”

New Jersey, Maryland, and Washington, D.C. are among the other places that have begun to move past the peak of daily case counts. This follows the pattern in South Africa and in the U.K., which were the first places in the world to report surges from the Omicron variant.

However, cases are continuing to rise in other parts of the country, including Western states. But hope is on the horizon.

“Sometime towards the beginning of March, mid-March, we should be in a very good position,” Ali Mokdad, professor of health metrics sciences at the Institute for Health Metrics and Evaluation at the University of Washington, told CNBC. “April, May, we’re going to have very few cases reported.”