Declaration of Independence: Shocking Sacrifices Were Made by the Men Who Signed It 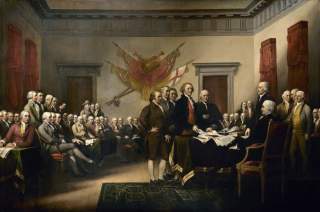 When reading the Declaration of Independence, it is easy to focus only on the sweeping language of the second paragraph and skip over the names and mutual pledge of the signers at its conclusion.

Though the principles enunciated in its opening paragraphs, such as the self-evident truth that all men are created equal, provide the moral and philosophical foundation on which the American regime rests, it is important to acknowledge that declaring principles alone secures nothing.

Principles need to be enforced by individuals who have the habits of character necessary to fight for them, and perhaps even die for them, if need be. In a time where talk of rights dominates our political discourse, a focus on duties is indispensable in order to teach citizens the responsibilities they owe toward each other and their posterity.

The signers’ mutual pledge to themselves to sacrifice their lives, fortunes, and sacred honor for the cause of independence shows that these men took seriously their duties to the people of the new nation.

A look at the historical record will show this to be beyond dispute.

Of the 56 men who signed the declaration, 12 fought in battles as members of state militias, five were captured and imprisoned during the Revolutionary War, 17 lost property as a result of British raids, and five lost their fortunes in helping fund the Continental Army and state militias battle the redcoats.

Below we will explore the sacrifices the signers made on behalf of the American cause.

Thomas Heyward Jr. of South Carolina was a signer of both the declaration and the Articles of Confederation. Heyward drew the ire of the British when, as a circuit court judge, he presided over the trial of several loyalists who were found guilty of treason. The prisoners were summarily executed in full view of British troops. In 1779, he joined the South Carolina militia as a captain of artillery.

Heyward’s compatriot in the South Carolina delegation, Edward Rutledge, also served in the state militia. At age 26, Rutledge was the youngest signer of the Declaration of Independence. After returning home from attending the Second Continental Congress in 1777, he joined the militia as captain of an artillery battalion.

Both Heyward and Rutledge aided their country in the battle at Port Royal Island, where they helped Gen. Moultrie defeat British Maj. William Gardiner and his troops.

Arthur Middleton, the last of the South Carolina delegation who served in the militia, took up arms against the British during the siege of Charleston in 1780. His fellow signers, Heyward and Rutledge, fought in that battle as well.

Upon the surrender of Charleston, all three men were captured by the British and were sent to a prison in St. Augustine, Florida, which was reserved for people the British thought were particularly dangerous. They were held there for almost a year before being released. On route to Philadelphia for a prisoner exchange in July 1781, Heyward almost drowned. He survived his fall overboard by clinging to the ship’s rudder until he could be rescued.

During the British occupation of Charleston, Commandant Nisbet Balfour ordered the seizure of many estates in Charleston, including those owned by Heyward and Middleton.

During his imprisonment, Heyward’s wife died at home, and his estate and property were heavily damaged. Rutledge’s estate was left intact, but his family had to sell many of their belongings in order to make the trip to Philadelphia to reunite with him after his release. Middleton’s estate was left relatively untouched, but his collection of rare paintings was destroyed during the British occupation of his home.

Thomas Nelson Jr. of the Commonwealth of Virginia was appointed to the position of brigadier general and commander-in-chief of the Virginia militia by Gov. Patrick Henry in August 1777. At that time it was thought that the British would be making a full scale invasion of the state. Nelson was able to muster only a few hundred men to defend Virginia, but the British instead decided to attack Philadelphia.

Nelson inherited a vast family fortune, much of which he used to support the American effort. He personally paid for the return journey home of 70 troops he had led to meet the British in Philadelphia during the summer of 1778. In the spring of 1780, Nelson signed his name to a loan for $2 million that was needed to purchase provisions for the French fleet that was coming to America’s aid in the war.

As then-governor of Virginia, during the Battle of Yorktown he ordered American troops to fire upon his mansion, which had been commandeered by Gen. Cornwallis and his men.

A member of the New Jersey delegation, Richard Stockton, had his estate commandeered by the British for use as a headquarters. As they left, British troops burned all his personal effects—including his library, private papers, furniture, and clothes.

Though Stockton was in hiding at the time, he ultimately did not escape capture; a traitor led the British to his position in November 1776. He was held captive in Amboy, New Jersey, and was then sent to New York City where he was imprisoned in a jail reserved for common criminals. Incensed by his treatment, Congress worked with British Gen. William Howe to obtain his release.

Because of his small build and stature, George Walton was thought to be the youngest of the signers of the declaration (he was actually in his mid-30s). He hailed from Georgia and served as colonel in the first regiment of the state militia in 1778. During the siege of Savannah, a cannonball broke Walton’s leg, which led to his being captured. He was held captive for nine months and was released in the early fall of 1779 in a prisoner exchange for a British navy captain.

At the same time Walton was held prisoner, his wife Dorothy was captured by the British. She was imprisoned on an island in the West Indies and was eventually freed after a prisoner exchange. During the Waltons’ confinement, the British ransacked their home.

British troops destroyed the home of George Clymer of Pennsylvania in September 1777 when they captured Philadelphia. Though his home was outside of the city, it was right in the middle of the path of the British march. American loyalists pointed out to the British homes belonging to patriots, which of course included Clymer’s estate.

Clymer also contributed to the war monetarily. He converted his entire fortune into continental currency, a risky move considering the likelihood that the currency would be rendered worthless. He also told wealthy friends to contribute to the American cause.

A delegate from Pennsylvania, Robert Morris helped insure Washington’s victory at Yorktown by using his own credit to obtain the supplies necessary to defeat the British. He spent more than $1 million (not adjusted for inflation) of his own money to accomplish this.

While serving as superintendent of finance of the United States, Morris regularly used his own financial resources to obtain much needed supplies. Using his own funds, for example, he purchased one thousand barrels of flour for Washington’s men in late spring of 1778.

Lewis Morris of New York served as a major general in the state militia. Morris devoted himself to recruiting men to serve in the militia and to help keep supplies up, which was a constant problem. For almost the entire length of the war, the British occupied his home, Morrisania, and used it as their headquarters. This forced Morris to live off of his close friends and associates until the war ended in 1783.

John Hancock of Massachusetts, the man with the largest signature on the declaration, served in the militia as major general in 1778. Hancock was put in command of approximately 6,000 men during the Rhode Island campaign. That campaign was ultimately unsuccessful because the French failed to carry out their end of the bargain.

Caesar Rodney served in the Delaware militia as well, attaining the rank of brigadier general. Rodney famously road on horseback straight from Dover to Philadelphia to cast his vote in favor of declaring independence (the Delaware delegation was split). He was with his men in the field during the brutal winter of 1776, helped quash an uprising in Delaware (there were a large number of loyalists within the state), and helped in George Washington’s effort to defend Philadelphia from being taken by the British.

Carter Braxton of the Virginia delegation accumulated massive personal debts helping the American effort in the war. He loaned 10,000 pounds sterling to Congress, which was never repaid. He also spent much of his wealth outfitting American ships so that they could carry more cargo. Due to the British capturing some of his vessels and others being lost out on the high seas, he suffered great financial calamity. These accumulated losses left him bankrupt by war’s end.

A delegate from Connecticut, Oliver Wolcott served as captain and then major general in the state militia. In 1776, he was appointed to lead 14 regiments in defense of New York City. He also commanded thousands of men in the Battle of Saratoga. Wolcott worked tirelessly to recruit for the Connecticut militia, which, like the army in general, was sorely lacking in numbers within its ranks.