A Drone for Christmas Could Land You in Jail 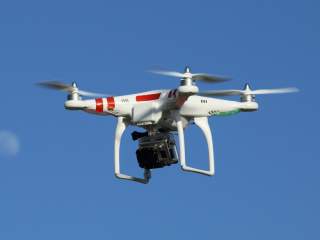 This week, the Federal Aviation Administration announced the formation of a new drone registry. As of Dec. 21, failing to register a drone that weighs more than 0.55 pounds—roughly the weight of two sticks of butter—can land you in jail for up to three years and subject you to $27,500 in civil penalties and $250,000 in criminal fines.

That’s right. According to the FAA, come Monday, it will be a federal felony to fail to comply with a regulatory decree that did not exist a mere seven days earlier.

Going forward, every drone owner whose aircraft meets the weight requirement at takeoff will be required to register his or her drones with the FAA. The FAA will be collecting names, addresses and emails from drone owners, and issuing certificates of registry and a unique ID number (similar to an aircraft tail number) that owners must display on their aircraft. According to the FAA, this registry requirement will promote a safety culture among recreational drone operators and deter bad actors from flying their drones dangerously.

For those keeping track, it was only two months ago that the FAA announced it was forming a task force to come up with recommendations for the implementation of a drone registry. One month later, the Task Force, having met for all of three days, returned a series of recommendations. And this week, the FAA has used its regulatory authority to establish a recreational drone registry.

There is one problem with this: The FAA is acting contrary to a law that Congress passed in 2012, which prevents the FAA from doing what it has now done by proactively banning it from regulating model aircraft—including drones when they are used for recreational or hobby purposes.

Section 336 of the FAA Modernization and Reform Act of 2012 states:

The FAA’s feeble response to this apparent congressional prohibition is that establishing the drone registry is not, in fact, a regulation. Further, the FAA asserts that it has always had the authority to require model aircraft, including drones, to be registered. According to the FAA, when Congress defined drones as “aircraft” in the 2012 statute, it actually affirmed the FAA’s legal authority—despite the prohibition on regulatory action—to require that they be registered in the future.

This argument is absurd on its face.

The statute plainly establishes that recreational aircraft are beyond regulation so long as they do not exceed 55 pounds, are operated safely and in accordance with “community-based set[s] of safety guidelines,” do not endanger the national airspace and are flown in conjunction with airport operators when they fly within five miles of an airport.

In other words, Congress wants local jurisdictions to set the rules governing recreational drone use.

This does not mean the FAA lacks any authority to act with regard to drones. In fact, it has a congressional mandate to regulate commercial drone use—a responsibility it thoroughly bungled when it missed its deadline to develop a commercial drone regulatory framework. And Section 336 expressly grants the FAA the authority to pursue enforcement action against specific recreational or hobby drone users who endanger the national airspace.

A blanket registry requirement for all drone owners, by contrast, would appear to be exactly what Congress does not want the FAA to do.

Nevertheless, the FAA is pushing forward with its registry rush job, insisting that requiring drones to be registered and marked will somehow allow law enforcement officials to tie illicitly flown drones back to their owners.

All evidence, however, points to the contrary. The FAA lacks the ability to track drone purchases en masse, making general enforcement of the registry requirement all but impossible. While good-faith drone owners will likely comply, bad actors who buy drones intending to fly into the paths of passenger jets or interfere with firefighting operations will have no incentive to register, since they are essentially signing their own arrest warrants. And even if they did register, what good would it do if the drone is sucked into a jet engine or melted by wildfire, or if—as happens frequently—it returns safely to its owner?

As a result, the FAA has succeeded once more at inserting the federal bureaucracy into an area it previously did not inhabit, without clear authority from Congress, without adequate notice to or comment from the public, and without actually solving any of the problems it claims to be tackling. All the while, it is acting directly contrary to the will of Congress and exposing millions of Americans to outrageously steep civil fines and criminal liability.

Should failing to register a small flying toy that may never leave an owner’s yard really amount to a federal felony? According to the FAA, the answer is “yes.”

But don’t worry: FAA officials insist that the threat of jail time is more about achieving compliance than actually punishing owners who do not register their drones.

In this era of overcriminalization, that assurance falls on deaf ears. So long as an unnecessary criminal law is on the books, it exposes otherwise innocent people to arbitrary enforcement—and that is how you get cases like Abner Schoenwetter going to prison for packing lobsters in plastic rather than cardboard boxes, or Bobby Unser being prosecuted for snowmobiling onto federal land while lost in a blinding blizzard and struggling to survive.

The FAA’s drone registry is public policy at its worst: rushed, opaque and sure to trap innocent people in the web of overcriminalization.

Jason Snead is a policy analyst in The Heritage Foundation's Edwin Meese III Center for Legal and Judicial Studies. This article first appeared on the Daily Signal.