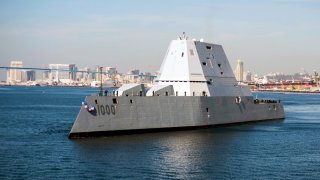 Here's What You Need To Remember: Aiming to make best use of the three ships once they're all in service, in early 2018 the Navy asked Congress for money to convert the Zumwalts into ship-killers. The $90 million would pay for the integration of SM-6 and Tomahawk missiles. The SM-6 is a long-range surface-to-air missile that also can strike ships.

David Axe serves as Defense Editor of the National Interest. He is the author of the graphic novels  War Fix, War Is Boring and Machete Squad. This article appeared last year.