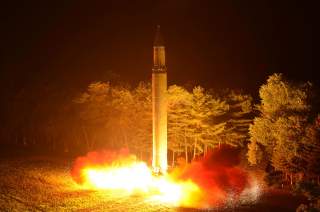 The United States likely does not have an effective means to counter North Korea’s massive new Hwasong-15 (HS-15) road mobile intercontinental ballistic missile according to analysts. The missile is so large that it could carry a multitude of decoys and countermeasures. It might even be able to carry multiple independently targetable reentry vehicles (MIRVs) in the future.

“This missile potentially has enough throw weight to carry multiple warheads plus decoys, chaff, jammers and other countermeasures to defeat any known missile defense system,” arms-control expert and president of the Ploughshares Fund Joseph Cirincione told the National Interest.

“It could overwhelm, fool and blind the radars, sensors and kill vehicles. You cannot stop this thing.”

“Video and photographs of the HS-15 released by the North Korean government indicate that it is more than large enough to carry decoys/countermeasures that would be designed to put further strain on the ground based midcourse defense (GMD) system,” Reif told The National Interest.

“The missile might even be big enough to accommodate multiple RVs [reentry vehicles] down the line, if North Korea could develop compact RVs that are compact enough.”

Moreover, the United States’ Ground-Based Midcourse Defense (GMD) is not likely to be particularly effective against the North Korean missile.

“It is intended to deal with a threat like this, but the test record stinks and the payload is roomy enough that we need to think worry about countermeasures.”

Missile expert Vipin Narang, an associate professor of political science at the Massachusetts Institute of Technology, told The National Interest that policymakers cannot count on the GMD to protect major population centers from a North Korean missile.

Reif explained the fundamental problem with the GMD system. “According to the Defense Department’s independent testing office, GMD has ‘demonstrated capability’ to defend the U.S. homeland against a small number of simple, intercontinental ballistic missile (ICBM) threats that employ ‘simple countermeasures,’” Reif said.

“It's not clear how DoD defines ‘simple countermeasures.’ The May 30 test of the GMD system against an ICBM target reportedly included simple countermeasures, but an analysis of the information on the test released by DoD appear to indicate that the decoy(s) used in the test had different brightness levels than the actual target.”

Moreover, North Korea might not be using simple decoys—and the GMD has never been tested against more complex countermeasures.

“We do know that the system has never been tested against ‘complex countermeasures,’ which DoD defines as ‘Use of target dynamics and penetration aids,’” Reif said.

“Are such countermeasures beyond the capability of North Korea to develop? I highly doubt it.”

Moreover, the North Koreans—despite the wishful thinking of certain commentators—are not stupid. Pyongyang knows exactly how to exploit the weaknesses of the GMD.

“The fact that North Korea tested the HS-15 at night would pose additional challenges to our defenses,” Reif said.

“First, testing the ability to load and launch with little warning would stress our ability to get an early track on the missile and its trajectory. Second, the GMD system has never been successfully intercept tested at night. In fact, there has been only one intercept test that has taken place at night.”

Indeed, the Pentagon’s Missile Defense Agency seems to take pains to make sure that all of its tests take place where the Sun offers some level of illumination.

“All of the 10 successful intercept tests of the system took place with the target directly illuminated by the sun,” Reif said.

“There's a reason for this. The sun's rays help to ‘brighten’ the RV and possible decoys/countermeasures for the GMD system's infrared kill vehicle.”

The Pentagon states that the GMD does not rely on the sun, but there are indications that darkness poses challenges for the interceptors’ electro-optical sensors.

“The Missile Defense Agency argues that the system does not rely on the sun's rays and thus the time of the test would not be a factor,” Reif said.

“But the dynamics of a nighttime intercept could cause problems such as by confusing the kill vehicle. The signature of a target at night presents a greater challenge than has been demonstrated through flight-testing to date. All of which means we should do more testing of the GMD system under more realistic and/or expected conditions.”

The GMD is not entirely useless however. Under perfect conditions—and if North Korea or another adversary gave some sort of advanced notice that it might launch an ICBM—the GMD offers some level of protection.

“We may be able to intercept a relatively small number of unsophisticated missiles under favorable conditions but a determined adversary—which North Korea is—is unlikely to present us with such a scenario,” Reif said.

“Missile defense will never provide an impenetrable shield and steps to improve and expand defenses will prompt adversaries to take steps to counter them, which is what North Korea is doing. Missile defense has a role to play as part of a comprehensive effort to counter the North Korean threat but it's a limited one and its capabilities are often vastly overstated.”

However, even reaching an imperfect level of defense would require realistic testing under real operational conditions. Despite the Pentagon’s assertion to the contrary, that has not happened. Right now, the GMD’s chances of success against the HS-15 are more a matter of prayers than science.

“Overall, flight intercept testing of the system has not demonstrated that GMD is capable of reliably defense the U.S. homeland against even a limited threat,” Reif said.

“The current ‘shot doctrine’ would be to fire four interceptors at each incoming missile and then... Cross our fingers.”