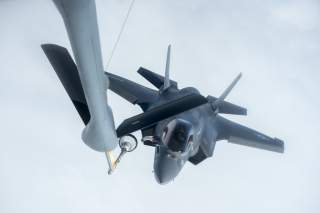 After years of anticipation, the Department of Defense has officially sent the F-35 Lightning II Joint Strike Fighter into combat for the first time.

- The strike was carried out against a “fixed Taliban target,” according to CNN, which first reported news of the operation ahead of the official DoD announcement. The Pentagon characterized the operation as a strike “in support of ground clearance operations.”

- “The F-35B is a significant enhancement in theater amphibious and air warfighting capability, operational flexibility, and tactical supremacy,” U.S. Naval Forces Central Command chief Vice Adm. Scott Stearney said in a statement. “As part of the Essex Amphibious Ready Group, this platform supports operations on the ground from international waters, all while enabling maritime superiority that enhances stability and security.”

- According to the DoD, the 13th Marine Expeditionary Unit is the first combat-deployed MEU to completely replace its fleet of AV-8B Harriers with the F-35B. The 13th MEU is currently part of the Essex Amphibious Ready Group, which initially deployed to the Pacific back in July before rolling up in the Middle East in September.

- The long-troubled F-35 first saw combat back in May when the Israeli Air Force deployed F-35A fighters for air strikes against unspecified targets.